The last year had not been a great year for the US denim market. The retail sales were not so great and for the first time since 2007, the imports of denim apparel fell by a large number â€“ 14% over those in 2010.

First lets see how were the imports of denim apparel into US were faring in the last 5 years from 2006 to 2010. As we can see below, the imports only fell in 2007 and thereafter there has been a steady increase in the quantities of imported products. However, the average price did fell in 2009 and 2010. 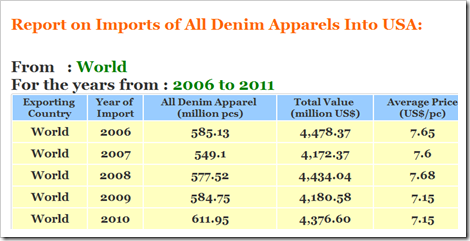 The countries which lost out the most during 2011 were the following :

Among the gainers  or the countries not much affected were
Mexico and Nicaragua  and some other countries like Lesotho , Guatemala etc.

The statistics give an indication that the concept of near sourcing is catching on with the buyers in US. The effect of the rising costs in China is particularly being felt and though the options of shifting bases to countries in Asia like Bangladesh, Cambodia, Vietnam etc remains, the buyers also want to put more eggs in the South American markets !!