Having received the figures for the complete year 2012, it is rather heartening to note that hte fall in imports of denim apparel in 2012 was only 3.5% less than that in 2011. The early 2012 had shown large reductions in imports and due to improved market conditions in US, these were set off in the latter part with the shortfall remaining at only about 3.5% . Going by the way the market has picked up , it would not be an improbability that 2013 may show higher imports than 2012 and 2011. Time will tell..

Check out the graph below : 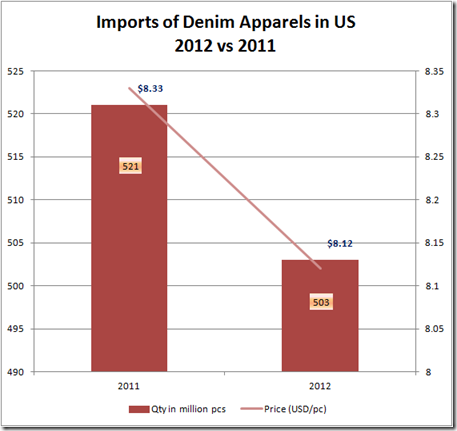 So, though we see fall in both prices and quantities, it still is not very negative considering that the fall in imports in 2011 compared to 2010 was about 15%. It can be safely said that the US market is recovering and we hope to see better performance this year.