This is a highly technical article on Indigo dyeing by Harry Mercer. Read on if you are technically oriented..

This is the first of a series of 4 articles addressing the problems and potential of Indigo dyeing. The Indigo color is the principal source of the almost magical appeal of denim. The dyeing process is unique among all methods of commercial dyeing, with the unusual design that is necessary for cotton dyeing with Indigo. Indigo has been used for thousands of years, principally on wool and silk fibers for which Indigo is more suitable The difficulties in dyeing cotton with Indigo are apparent with the numerous different shades that result, up to 15 per dye lot and also with side-center side variation. Elimination of this variation has been accomplished, but it requires a deep understanding of the unusual variables of Indigo dyeing. The 2 keys to success in manufacturing denim is firstly the dyeing, then the finishing, both of which are more complex to conduct at a high level of quality. The failure of most denim companies to overcome the challenges in denim wet-processing is the reason why they are held hostage to low profit margins.

Indigo dyeing is a unique process that makes denim special and distinguishes denim operations from all other types of cotton fabrics. No other method of cotton textile dyeing requires the multiple application of dye to achieve a dark color, thousands of liters of dye bath, slow production speeds and extremes of color variation and color-fastness. Indigo dyeing has been conducted without these problems. The 2 most significant sources of Indigo dyeing are the

1) Circulation system design: Indigo dye in its reduced form consists of dye particles that have been partially solubilized and exists in the form of charged colloidial particles. Colloidial dispersions will sink due to the influence of gravity and require some agitation to keep them uniformly dispersed in the dye box. If sample are collected from different parts of an Indigo dye box(top, bottom, front and back), the concentrations are usually different. The uneven distribution of dye in the box as the machine operates contributes to color variation. For many years, BASF, a leader in indigo dye for most of the 20th century, recommended that the volume of the dye box be “turned over” 2 or 3 times an hour. This means that if the box volume is 2000 liters that 4-6000 liters of flow into and out of the  dye box is needed to prevent low concentrations in part of the box and high in others. Indigo machines produced in recent decades have been furnished with pipes that are too small to deliver the right kind of flow. In terms of Reynold’s number , the flow should be slightly beyond laminar, in the low transitional range to ensure uniform disper-sion while avoiding turbulence that would destabilize the dye. Also, for uniform dispersion of Indigo, the entry line should be positioned in the yarn exit side of the box near the top, while the exit line should be at the yarn entry side near the bottom. Many Indigo machines have the dye entry line on one side and the exit line at the yarn entry, which is a cause of cross-shade variation. 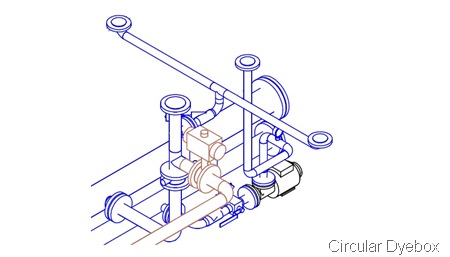 2) Dye box design: In a previous article I discussed the effect of dye box design on the color consistency of Indigo. In most indigo machines the box design is responsible for massive losses of hydrosulfite at the surface of the dye boxes during operation which results in economic losses as well as variations in hydrosulfite concentrations in the machine which leads to color variation. The principle is known as Specific Surface Area which means that the larger the surface area of the Indigo box to the volume, the faster the hydrosulfite is lost. So, in a 2000 liter box with 2 square meters of surface area , the hydrosulfite will decompose at twice the rate of a 2000 liter box with 1 square meter of surface area. The total hydrosulfite losses in a typically larger box of a rope range will average around 15%, while in the smaller boxes of a typical sheet range the losses will be from 45-70%.

3) Tension Control: High yarn tensions on continuous Indigo dyeing machines has 2 significant effects- the yarn loses strength and the ability of the dye to penetrate the cotton fibers is reduced. The loss in yarn strength results in higher warp breaks in weaving, meaning lower efficiency and higher weaving off-quality. The reduced penetration of Indigo into the fibers results in rubbing fastness problems and a higher per cent Indigo on weight of yarn for a specific depth of shade.

Vintage Denim – At What Cost To Environment ?

4) Immersion time: Indigo dyeing is a form of wet-on wet processing. The yarn is normally scoured and washed before entering the dyeing section, which means that it is already wet. In order for the Indigo dye to enter the wet yarn efficiently’ a process known as “liquor exchange” is necessary in which the Indigo dye/water displaces the water already in the yarn. This is a slow process and the longer the immersion time , the more easily the dye penetrates into fibers and yarn, resulting in better colorfastness and darker color. Until the 1970’s, Indigo machines operated at speeds of 12 meters per minute through the much larger boxes of rope ranges, so the immersion time was 2-3 times longer than on modern sheet ranges. The dye penetration was complete which resulted in the darkest possible color with 3% Indigo and that would never fade.