This is a guest post by Harry Mercer on Indigo dyeing. It is second part of the article in series. The first part can be seen by clicking here

In the previous article, the basic machine factors in Indig 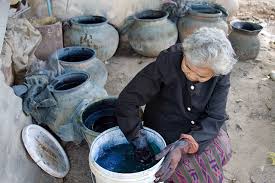 1) Raw materials: The basic ingredients for Indigo dyeing are the Indigo dye, sodium hydroxide and the hydrosulfite

(sodium dithionite). Indigo is an insoluble vat dye which means that it cannot enter the cotton fiber until it is made soluble by the process of reduction .Reduction is basically a process where hydrogen is produced which opens up the Indigo dye molecule allowing it to attach to a water molecule which carries the vat dye into the fiber. The most commonly-used

2) The reducing chemical is known as “sodium hydrosulfite”, but this nomenclature is incorrect because

the molecule does not contain hydrogen. The “hydrosulfite acts on the sodium hydroxide to split it into NaO and hydrogen, both of which attach to the dye molecule in the reduction process.

3) The reduction of Indigo with sodium hydroxide and sodium dithionite is known as vatting and has been used for thousands of years. Vatting refers to mixing the dye and chemicals into a tank or “vat” with some stirring and then waiting from 1-4 hours usually for the complete reduction of the dye to occur which is noted when the solution color is a clear, yellow-brown.. The solution then is referred to as “leuco” Indigo, a Greek word meaning “without color”. The concentrated Indigo mix is then ready to pump into the dye machine for dyeing.

4) Most of the variation in Indigo dyeing is a result of instability in this concentrated mix. Sodium dithionite can be extremely unstable, with the concentrations in this feeding

mixture becoming smaller with the passage of time. For example, the initial recipe may specify 100 grams per liter of sodium dithionite, but by the time the last liter goes into the machine, the concentration often drops to 20 to 30 grams per liter and each 5 gram per liter loss in dithionite concentration produces a small Indigo color variation. This is evidenced in many denim operations that suffer 10-15 colors after fabric washing per dye lot.

5) There are several causes for the decomposition and strength losses of the reducing agent in the feeding mix: Oxidation at the surface of the tank, unnecessary stirring and high concentrations of ingredients. The stirring should be only enough to maintain consistent concentrations of dye and chemicals from the top of the feeding tank to the bottom. Stirring beyond that will result in more reducing agent being oxidized. Also, in many Indigo operations the stirring units are badly designed with small propellers that turn at high speeds. The Indigo feeding mix is of very high viscosity and in order to stir the entire mix out to the edge of the tank, large propellers that cover the tank diameter are needed. These stirrers should turn at only 10-15 RPM in order to avoid turbulence that would lower the strength of the mix. With regard to concentrations, if the viscosity of the dye mix is too high, the reduced Indigo will not disperse uniformly resulting in areas of varying concentration in the tank that will cause color change as the mix is fed to the machine. Concentrations above 23% solid have a tendency to settle, so that there are very high concentrations of reducer in the bottom of the tank, making a greener Indigo tone when pumped to the dye boxes, and lower concentrations of reducer at the top of the tank, making a redder Indigo tone later in the dyeing. No more than 80 grams per liter of indigo should be added to a feeding mix as this is the maximum amount that has long been proven that can be completely reduced. The amount of reducing agent should also be limited to 80 grams per liter since greater amounts will cause more rapid decomposition due to aerobic and anerobic decay.

6) The concentrations of indigo and reducing agent must be actively managed so that the same concentrations of dye and reducer are feeding to the machine every minute,otherwise the color will change. Management of the feeding mix requires an understanding of the chemistry of reduced dye solutions, measurement of concentrations and skill in correcting strength losses of ingredients in the feeding mix especially of reducing agent and alkali. There are 2 simple , but special test methods to measure the concentration of alkali and sodium dithionite in the feeding mix: a 2-endpoint titration for alkali and the glass plate test which have been in use by the best denim companies for over a century and will be covered in a future article.

How To Stitch Quality Denim Garments?

The problem of Indigo color variations is principally a result of inconsistent dye and chemical concentrations going to the machine. A glance at the design of flow of dye and chemicals into Indigo dye machines should make this obvious. The multiple dye box arrangement and circulation in the dyeing section of indigo machines allow the blending of indigo and reducing agents, so the problem of variation obviously starts at the mixing tank.