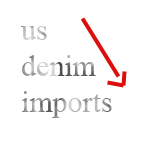 There has been a general slackness in the denim and other apparel biz in the US since the beginning of the year . As mentioned in one of our previous reports , the fall in imports of denim apparel into US had been high – at about 6.3%  in the first two months of 2011. However, when we look at the figures that have come out for the period of Jan – August ‘2011 , the figures are more disturbing and indicative of a consistent fall in imports. Lets have a look :

China has shown the most significant fall in export figures and some other countries like Bangladesh, Cambodia etc also follow but in smaller percentages.

The imports have fallen significantly in 2011 when compared to the same period in 2010.  This fall is significant since we have seen that denim sales have ditched the recessionary pattern in the past  that other apparel products have shown. In 2010 , apparel sales and (correspondingly imports) were falling for most of the products but denim continued to bulldoze its way to growth . This was reflective of the need by consumers to substitute other apparel items (specially trousers) with jeans as jeans is a  ‘Multi Occasion Apparel’ and buying a good pair of jeans actually cuts down the budget of some consumers who wish to substitute a number of other trousers with that jeans.
However, the consistent fall this year reflects that there is some saturation point reached due to the continuous increased spending on denim . We need to , however, wait till the beginning of next year to see if this falling trend carries off in the next year.
But there are no huge reasons to worry. Denim has always shown a trend where it surges ahead for 3-4 years and then goes down a bit for about 1 –2 years and then rebounds sharply. So , what we all can do at the moment is keep our fingers crossed and wait for some good news in the coming months.