Selvage Denim is the denim made on Old Style Shuttle Looms rather than the modern shuttleless looms. Simply stated it is ‘Self – Edge’ denim which is created since the Weft goes back and forth as a single thread rather than individual threads for each weft weave..As the weft loops back from the end, it creates a ‘Selvage’. Traditionally the denim made on the Shuttle Looms was so narrow that about 3 yards were required to make a jeans. To maximize fabric consumption, the jeans makers used the Selvage also which can be seen when the Jeans is turned up.The color of the thread in the Selvage was used to differentiate between fabrics. True Vintage Jeans can be recognised by the Selvage thread.

Traditionally , American Denim was considered superior. However, the Americans replaced all their Shuttle Looms by faster looms. Many of these looms were bought by Japanese who felt that there was a market for Traditional Denim. And when the Premium Denim craze began after 2000, many Jeans manufacturers introduced the Jeans made from Shuttle looms and Quality Dyeing .. . Quality Dyeing?
Quality Dyeing is Indigo Dyeing done using Loop Dyeing machines – which are themselves rare and vintage machines. The Rope of Cotton Yarn goes through a Vat of Indigo and then is taken to the ROOF of the factory where it is allowed to oxidize and then brought back to dip. Some companies do as many as 30 DIPS creating a rich blue Indigo character.
Another traditional thing that goes in the process of creating a Traditional Premium Denim is the Chain Stitch at the leg opening – which gives a thick stitch line at the hem.

Denim produced on Shuttle Looms is naturally irregular . Accompanied with the additional details in dyeing and stitching, it produces a unique product and as the Jeans age, they produce a unique pattern. Like Fine Wood, Selvage denim will become more beautiful with age and acquire a patina which is impossible to create artificially.
Many of the Japanese Denim brands are using Selvage Denim. The most famous of them is EVISU. Their HERITAGE Collection is made entirely of Selvage Denim only , produced on 30″ looms and dyed by LOOP Dyeing method. With a minimum of 16 dips, they go upto 30 dips . For Chain stitching, they use the ‘Union Special Machines’ which are considered to be the ‘ROLLS ROYCE’ of stitching machines in 1950s.. 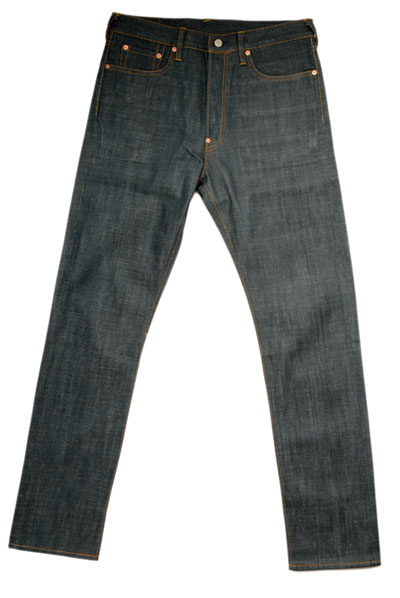