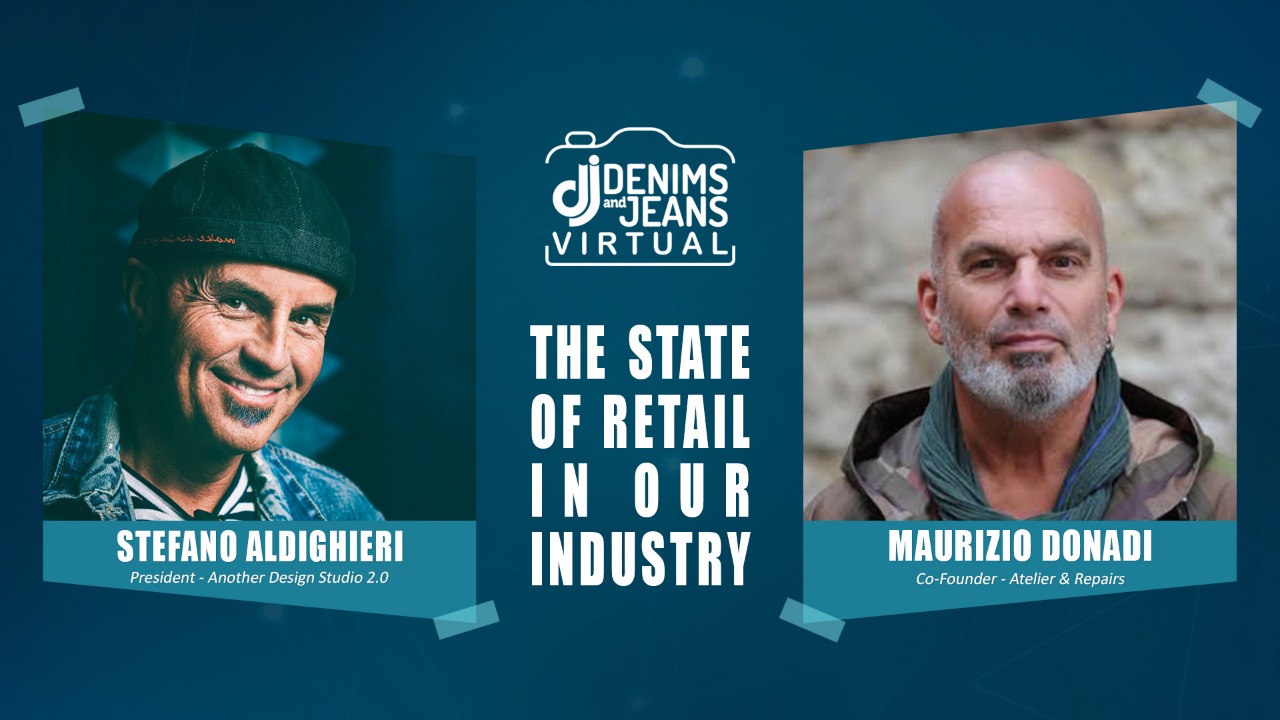 During the Denimsandjeans Virtual show held on July 22-23 , there was an interesting talk scheduled with Stefano Aldhighieri and Maurizio Donadi – both well known veterans in the denim industry . And the title was very topical and interesting – STATE OF RETAIL IN OUR INDUSTRY.  Retail is the most affected segment of our industry and having a snowballing effect on the entire supply chain and millions of people employed globally. However, for some reasons, the talk could not be held as scheduled . Both of them kindly agreed to record their talk post show and share with all of us  ! We bring the video (check here)  of their talk below alongwith some key points raised .

The beginning of the video is quite interesting with a virtual assistant bringing some interesting data to the talk :

Both of them agreed that the problem with the retail did not start with Covid19 and it was already under progression for last few years. The malls in US grew more than twice the rate of population growth between 1970 and 2015 and the growth was bound to hit a speed breaker at some point of time and the numbers above give some idea of the state of affairs in the retail. Stefano mentioned that the stores that closed before were somehow re-opened over time- however, with Covid closures, the re-openings would be much lesser.

Maurizio agreed with him and said that the times before were challenging for retail but not disruptive – which they are now. But there will be companies who will take advantage of this situation and re-purpose the retail space. Both agreed that there are a lot of retailers who should not be there and who do not offer anything different from the store next door except being a dollar cheaper ! If a brand does not have a soul – it should not exist.

Stefano made a very interesting statement  on state of consumer purchases in last few years specially with social media getting stronger :

Maurizio mentioned about identity crisis being faced by brands now  – not only a revenue crisis , the crisis of values and principles of a brand. The brands need to consider that without a soul, they have no reason to exist . He mentioned about two scenarios – between now and till the time a vaccine is made. Till that time, its a fight for survival and one needs to come out of the situation. And after that some people would want to go to pre-covid situation in terms of their brand’s principles . But there will be companies who will be coming completely different and with a much clearer identity and an interesting proposition which they may not have now. Both of them also hoped that the luxury brands would really make luxury products !

Stefano gave a good example of Ron Johson who tried to transform JC Penny few years ago but was chased out of the company for trying to reduce volumes. However, he was perhaps right and JC Penny would have been in a better position today if he had succeeded.

He also gave a good example of Paul Smith store in London where he usually visited with not a purpose to buy anything but ended up doing so as the offering was so compelling and customer service so great . So the brands need to position themselves well and bring out compelling products for the consumers. Even premium denim would sell if it was really premium !

Maurizio also mentioned that hopefully there will be less discounts in the future – something that has destroyed the market and the price points and products are more honest.