Boot Cut Vs Skinny Jeans : Which Style Is More Popular ?

Skinny Jeans are supposed to be the most popular style in women’s jeans currently and they are also catching up in the men’s style with a lot of men attracted to this style.
Ideally the jeans sold by /through  any large retailer (offline or online )  or through online auction should have the largest % of sales in the Skinny styles .. But this assumption is belied when we look at the sales made on  Ebay during  the period August 2010 to July 2011 ..
Its the BOOT CUT style that takes the cake ! 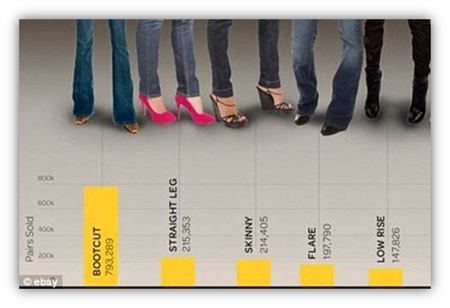 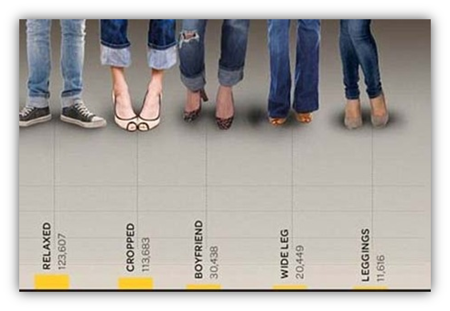 Does this mean that Boot Cut jeans are more popular than the Skinny Jeans???
We really cannot say so .. If we look at Google trends on searches related to Boot cut jeans Vs Skinny Jeans , we will find a different story. The skinny jeans as a search item far exceeds in the number of searches as compared to Boot cut jeans.. And we know that Google searches do reflect the tendencies of consumers to search for the products they want .. Lets have a look at the chart below : 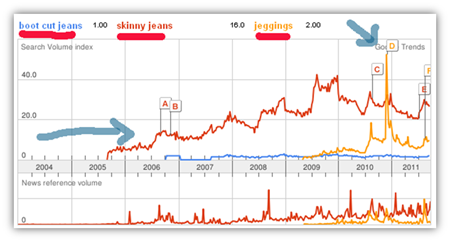 The Google trend chart for the period 2004 to 2011 shows the searches made for :
Boot Cut Jeans
Skinny Jeans
Jeggings

As we can see from this chart, the search for skinny jeans has been dominating since the 2005 when skinny jeans started to become popular . It kept on increasing in popularity though we see some dip in 2010 and 2011. However, if we look at the Boot Cut Jeans searches, we will find that they have been almost flat since 2005  and they seem far behind in popularity compared to Skinny Jeans..
Jeggings trend is interesting – The word JEGGINGS was recently coined in around 2009 and we can see searches related to Jeggings rise from a few to a huge number which crosses that of Skinny in mid of 2010.. Jeggings indeed started as a trend in 2009 and was hugely popular in mid 2010 and still continues to be popular (point D) . It seems to be more popular than Boot Cut..
However, we need to remember that consumers sometimes search more for products that they do not know and hence searches for Jeggings suddenly peaked in 2010 . Whereas products like Boot Cut are taken as regular products and probably not searched so much.
Whatever said and done , it can be concluded that high of Boot Cut jeans may indicate a growing trend to buy these jeans but Skinny Jeans cannot be just wished away!. It is not going anywhere at least for some time.