A Visit to Momotaro – Kojima , Japan

This article is a reproduction of an articleby Adam Marelli on his recent visit to Kojima (Japan) where he saw the traditional denim production by the jeans brand Momotaro..It is a beautiful outsider’s view of the rare art of Japanese denim production.

Blue jeans emerged from humble beginnings as the workwear of Americans, but in the wake of World War II it was the Japanese who would usher in a new era for blue jeans.  During the reconstruction of post war Japan, American looms were imported and set up in small factories.  Soon enough, companies like Toyoda (who would later become Toyota) produced shuttle looms of their own.  Many of these machines are still in use today, because as much as companies, like Apple, can’t seem to understand…you can actually build a product that lasts more than four years.

Last year Adam embarked on a project called “Lost Ceremony.”  The first stop was a town that most people would never visit.  There are no famous temples or red gates sprinkled along the river.  Kojima, located in Western Japan is home to fabric producers, most specifically makers of some of the world’s finest denim. 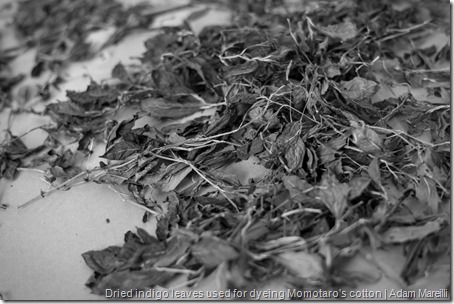 Exotic fabrics from India to Peru have commanded treasure chests of gold, started wars and paid some of the most famous dowries in history.  While advancements in technology have allowed industry to produce the vomit-inspired upholsteries that scratches us on bus trips and the miserable patterned rugs than can depress an entire Texas cheerleading squad, there will always be specialty producers who take the time to make  a top quality product that feels, wears, and looks better than any imitation. 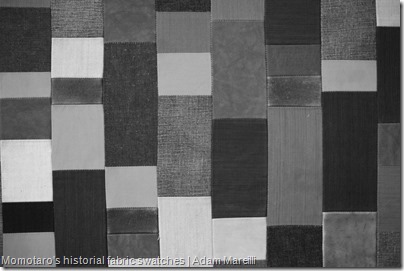 How to Spot Quality

Most of our clothes are bought off the shelf.  In a person’s lifetime they might get a handful of garments made for them.  Something I learned during my years in construction was that most of the things we buy from Hondas to Bentleys are pretty much a-la-carte options at best.  Very few items are actually custom made from start to finish.  And that’s not necessarily a bad thing.  Because with the endless options that customization offers come the anxiety of not knowing what you want, how to ask for it, and if you really need it at all.

So how could someone spend $1,500 on a pair of customized jeans?  Well a trip through the Momotaro workshops opened my eyes to the areas where most companies fall flat on quality production and where they chose to rip open the DNA of a jean and redesign them from the ground up.

Uchida coaching the shuttle loom into the smooth rhythm of production. With all its belts and pulleys, they look like something out of a Dr. Suess book. But in the end the machines put out some incredible denim.

Momotaro has a history of fabric production that is over one hundred and fifty years old.  This is not your “Hipster-pop-up-hand made-authentic-heritage-over-hyphenated-excuse” for small scale production.  Denim only represents 20% of their total fabric production annually.  In true Japanese style, if they can’t do it perfectly they would rather not do it at all.  The range of denim they produce ranges from hand dyed and hand woven to synthetic dye and motorized loom weaving.  They cover all of price ranges as an artists would learn how to mix all of their colors.  As new lines of jeans are introduced, they rest of a firm foundation which allows Momotaro to make decisions based on preference not strictly economy.  In the last few years Momotaro has branched out to European and American markets which has presented them with a new set of obstacles.  The international markets, not only, have different visual tastes…they are also shaped differently.  What does that translate to in jeans?  Well there are not too many 6’-4” guys named Lars cruising around the streets of Kojima.  People come in a multitude of sizes.  Momotaro had to make some scale adjustments for their clothing to be internationally compatible.  But the little tweaks in length and breadth did not impact the quality at all. 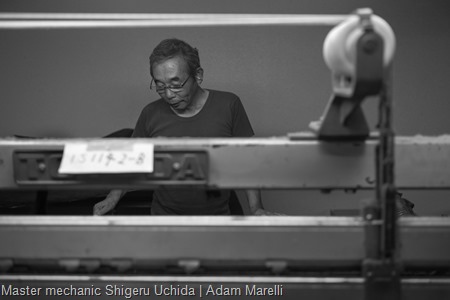 Master mechanic Shigeru Uchida is one of the dividing factors between Momotaro and the rest of the denim world. Adam Marelli

Why your old Levi’s aren’t Momotaros

At the moment American denim companies like Levi’s and Lee are ironically trying to reinvent themselves as quality brands.  The irony is that the denim business they shipped to Japan fifty years ago is now producing their highest quality jeans ever.  So where are the details in a pair of jeans?  Just flip a pair of Momotaro’s inside out to see some of the attention they give to their jeans.

Zimbabwe Cotton.  If you really want to compete in the denim world the cotton has to come from Zimbabwe.  Why?  Well…contrary to Eli Whitney, they claim that the finest cotton still needs to be hand picked.  The cotton gin crushes the husk of the cotton into the fibers and damages them.  The feel is outstanding, but I have a feeling if anyone tried to resurrect hand picked cotton in the United States it would cause riots.

Copper or Sterling Silver Buttons & Rivets with the family crest.  Inside the jeans you will not find anonymous copper rivets.  Momotaro embosses their family crest of the rivets.  Its a subtle way to say that the company is held together by family.

Heavy Duty Pocket Liners. I wear jeans for any type of work day.  Whether I am at a work bench, on a shoot, or trying to keep my eyes open through a meeting, I often wear jeans.  One thing that kills me about cheap pants is that without fail the pockets rip.  How do I know?  Well usually its because I lost something (like my keys) and then realize there was a hole in the pocket.  Replacing those magnetic front door keys can be expensive.  So I love that the pocket fabric is not made of the standard tissue paper you find in chain store denim.

The Fade. I am not talking about your barber’s ability to go from skin 1 to a number 4, when I say fade I mean how well Momotaro’s break in.  An axiom of aesthetics is that anything that looks best new is of poor design.  In contrast to a fashion culture that is constantly trying to pass off 16 year old girls as women (Calvin Klein, I’m looking at you…) age is not something to be feared.  And while we are all doing our best to “Earn our grays” or jeans should be along for the ride.  A well made pair of jeans will reflect their owner, which is why my jeans and yours will never look the same.  Its the closest thing to a fashion fingerprint out there.  Much better than buying some pre-faded, belt sander interpretations of denim.  You will have to wear these in yourself.  And that is half of the fun.

The Peach. The Momotaro myth of a young warrior who protected the region is symbolized by the peach.  The surrounding area is famous for its produce, which is tangled in local folklore.  Momotaro decided to pay homage to their local production through the embossed design on the rivets and also the pink inseam stitching of the jeans.  Its a small and subtle detail.  But nothing makes the Japanese happier than playing the game of subtlety.

Selvedge/Self Edge Fabric. If you have ever walked into a boutique and a sales person has tried to sell you on “Selvedge denim” and you thought they just had a lisp, you are not alone.  Turns out, they are not mispronouncing “self edge.”  Selvedge refers to the narrower width of fabrics produced on shuttle looms.  Its a tailoring detail that may not interest anyone but denim die hards, but from a production stand point its worth noting.  Textile companies are always looking for ways to stream line, aka lessen production costs, even at the expense of quality.  Selvedge denim is not an open weave at the end of the loom.  The fabric is woven closed on the ends.  This limits the overall width of the bolts.  So its not less expensive, in fact its a good deal more.  The end result is a different feeling and looking outside seam on the leg of the pant.  When we consider that it is the longest seam in the entire garment, it makes sense not to cut corners.

The pulsing clicks of the shuttle looms dominate the workshop.  Master mechanic Shigeru Uchida excuses himself for not having ear protection for us.  Click and bang of springs, gears, and rollers sounds like someone dropping a box of wrenches down a flight of stairs.  But underneath this cacophony is a rhythm that Uchida conducts with a small box of hand tools.  He is the only one who knows how to work all of the looms, something that is not lost on Katsu Manabe, next in line at Momotaro.  He explained that Uchida has been servicing these machines for over forty years.  His education in their inner workings was a classical apprenticeship, light on questions and heavy on beatings.  Uchida’s tough upbringing in this maze of fabric and gears is not something he wants to pass on.  He speaks softly to his apprentice who is fetching tools for the constant adjustments.  It almost appears that making fabric is not much different than farming produce.  Both require an inordinate amount of attention and maintenance. 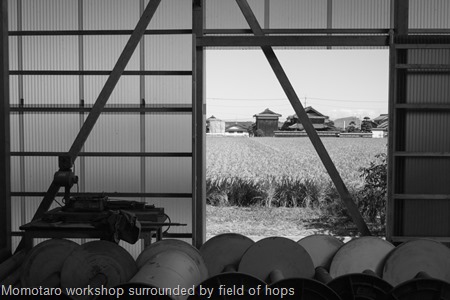 The Momotaro workshop is surrounded be fields of hops grown by the local breweries. Adam Marelli

Working around Uchida was a delightful experience.  Whenever I have the opportunity to watch people who are extremely good at their profession, I get all excited.  The dexterity at which he reaches through these machines is astounding.  There are no electronic read outs or manuals.  He touches the machine to feel and listen to its sounds.  As he checks the output of the fabric from the loom he makes small adjustments to keep the machine on track.  Its rocking motion appears to eventually shake itself loose.  Each machine teeters on the verge or production and destruction at the same time.  Without the right touch, I got the impression the looms would shake themselves to death.  But with Uchida’s tuning hand they pump out thousands of yards of beautifully rich denim. 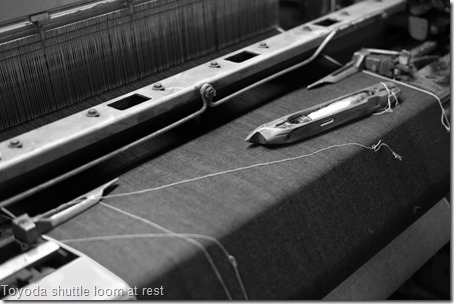 A detail shot of the Toyoda shuttle loom at rest. Keeping these machines running has been Uchida’s study for over forty years. Adam Marelli

At the end of the day we all retire to the back of the workshop, for the post work smoke break.  Never having been a smoker myself, its strange that I actually enjoy these breaks.  Its nice to see Katsu and Uchida step away from their work.  They have a calm satisfaction that belies the complexity of their daily tasks.  But as the sun is setting on the fields of hops and a bit of sun light catches a lone persimmon hanging from the tree, it is easy to see how work and poetry made their way together in Japan.

On a journey, ailing–

My dreams roam about

Over a withered moor.

About : Artist & photographer, Adam Marelli is based in New York

City.  His projects explore the ancient crafts of building, maestros in their   workshops, and designs handed down through generations.  Whether he is photographing a master carpenter, dodging fish at a local market, or at the drafting table, he is in constant search of the threads which bind our cultures together.