The Chinese denim market is  growing   at a fast pace with almost all major world denim brands having established a presence there to tap the increasing disposable incomes of the growing middle and upper middle class. Being the largest producer of denim fabric and apparel has helped in the penetration of the denim apparel in China.  A  report by USFDA brings out various aspects of the patterns of consumption of denim apparel in China.

Because of smaller housing in China, most Chinese consumers have smaller closets than Americans. Thus, Chinese tend to purchase and own fewer apparel. The report cites a survey by Cotton Incorporated – according to which -  Chinese consumers on average spent 7 percent of their apparel purchases on denim products, while the figure in the US was slightly higher at 10 percent.

The survey revealed that denim jeans are getting more popular in China, especially among the younger set. Denim products’ share of apparel purchases is 8 percent among the consumer group aged 15 to 29, compared with 6 percent of those from 30 to 54.

Denim jeans are the most purchased denim apparel. On an average, each Chinese consumer owns 4.2 denim jeans. The average unit purchase price of denim apparels is US$12 (RMB89). However, 26 percent of consumers said they don’t have any denim garments.

The retail sector in China is getting sophisticated, from modern shopping malls to open market stalls. However, Chinese consumers’ buying habits differ sharply from that of the US. Nearly half of denim products are purchased at department stores, compared with only ten percent in the US. Thirty-one percent is purchased through supermarkets in the US, and only two percent for Chinese consumers. The clothing market – a traditional sale point – provides 16% of the denim sales .

Sales and demand potential demonstrated by the China market has successfully attracted more international brands as well as luxury products. All top ten denim brands are available in the China market and Chinese consumers are becoming more brand conscious. When shopping for apparel, 38 percent of Chinese consumers prefer domestic brands and 22 percent prefer western brands. A quarter of Chinese consumers said they usually shop for a particular brand, which is very similar in the States at 24 percent.
The following graph by Cotton Inc shows the Chinese love for denim across various age groups  . It shows that though the denim is , understandably, more popular with the younger age groups , the love is there even in higher age groups – portending well for the growth of the denim market in China.

Imports of Denim Apparel In US : Improves in 2013 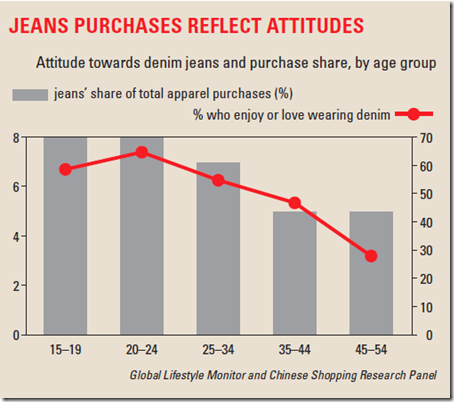