2010 :Increase Of 14% In Imports Of Denim Jeans Into USA During First Half

US is the most important market for denim jeans exporters around the world. Any changes in demand in US affects a number of exporters worldwide . With the recession having hit US , the demand for most textile and related products had taken a hit . Luxury goods imports had been particularly hit . However, if we see the trend of denim imports over last 2-3 years , we find that that it has been mostly positive and quite encouraging in the current economic scenario. The year 2010 has seen a marked increase of over 14% in imports of these items into the US as compared to last year with both Mens/Boys and Womens/ Girls jeans showing a vast increase in imports over the same period last year . When we speak of Men’s / Boys jeans , they showed an increase of about 12.8% in volumes from 116 million pieces last year to 131 million pieces this year. In terms of prices, the same increased marginally by 1.54% adding icing to the cake . See the table below :

Source: US Dept of Commerce

The total Mens/Boys jeans imported into US in the year 2009 was 241 million pieces reflecting that imports in the first half of the year are lower than those in the second half. This normally remains the trend in most of the years . Going by the rate of increase in imports in the first half of this year , we could see Men’s/Boys jeans touching a record import of about 270 million pcs in the year 2010 . It is also interesting to see who are the main exporting countries for Men’s/Boys’ Jeans into US . Let’s have a look at the table below :

We see from the above table that most of the countries increased their exports of Men’s/Boys’ jeans to USA in 2010. However, certain South American countries like Mexico , Honduras etc suffered reductions in their export figures indicating clearly that the source of jeans is shifting to Asian countries. Mexico, however, remains the largest exporter despite the fall and maintains substantial lead over the second highest exporter – Bangladesh. Bangladesh stands out very strongly as a denim exporter and clearly overshadows its large neighbour – India – in terms of denim jeans exports. India has been poorly lingering at these levels of exports and is clearly non-competitive in terms of pricing and also not being a receipent of tariff and other benefits for imports into US.

Lets also see if the average prices for exports of jeans has changed in this period from these countries. 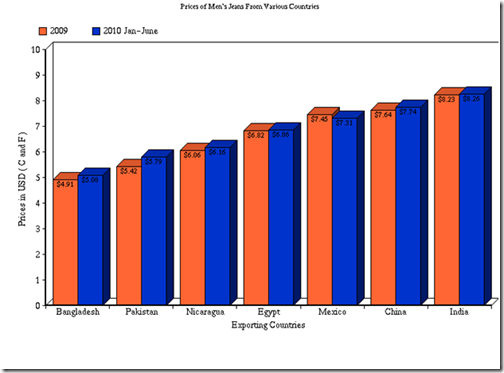 As we can see from the graph above , Bangladesh is the cheapest source of denim jeans to USA . On the other hand , ironically , China is one of the most expensive country exporting denim jeans to US. The costs in China have been continuously rising and with their currency not remaining as favourable as it was before , China will not be looked upon as a source of cheap denim garments. However, it is also a fact that there is a renewed emphasis in the Chinese textile industry to move up the value chain and it is showing in their export figures as more and more value added garments are added. Pakistan got the highest increase in prices of 6.82% over 2009 on top of 37% increase in volumes and strengthened its place among the Men’s denim market in US .

Now , lets also have a look at the figures related to imports of Women’s/ Girls denim jeans into USA during 2009 and 2010.

Import of Women’s/ Girls’ Denim Jeans and Breeches Into USA

The imports of the Women’s/Girls’ denim jeans into US have shown even more robust growth in the first half of the year with a whopping 16.%% increase over the same period in 2009. This growth trend in both the segments is indicative of strong growth in demand and sales in US for the entire denim sector. Though the prices of the women’s denim showed a slight decrease of 0.90%, it hardly dampens the positive sentiment on this front. This trend is expected to continue over the whole year and , like Mens/Boys jeans, expected to produce record import figures this year.
It would be interesting to see where this increase in denim imports is mainly coming from :

As we can clearly see from the table above, China is totally dominating the scene when it comes to the jeans in the women’s category. It already has a share of close to 40% (of imports ) and which it is adding on to rapidly with a growth of 44% in 2010 export figures over last year. Women’s denim is high fashion oriented with smaller lead times , a large number of styles and washes which change frequently .. China’s dominance in this segment clearly indicates its strength in catering to these market needs and demands . Besides China the other countries showing great volumes and growth are Bangladesh and Cambodia. Vietnam and Egypt are also high volume exporting countries – though it seems that both have suffered a temporary setback in exports during 2010. Pakistan is not very strong in the women’s denim and India is again at the bottom of the table with hardly any impressive figures.

To understand how prices are moving in a continuum over the last year , lets compare the prices of the whole year 2009 with those in the first half of year 2010.

A look at the figures of prices from various countries throws up interesting facts. Jeans from Mexico are the highest priced , expectedly , as it provides enables turnaround and serves the quick fashion category. A large number of brands like to push products into the market quickly by getting them manufactured in nearby countries like Mexico and then based on customer response, place the repeat orders (with longer lead times ) in countries like China or Bangladesh. Bangladesh again remains the cheapest source followed by Vietnam and Egypt . Vietnam has shown a strong performance with a 17% increase in prices over last year .

On the whole, the denim scenario in US seems quite positive in the near term. Coming during these recessionary times , this performance is highly encouraging and bodes well for the industry . However, it also needs to be noted that denim sales are actually cannibalizing on the sales of other non-denim products as consumers are looking for clothing which they can use at multiple occasions to reduce their overall expenditure. As the economy improves significantly , we may , ironically , see some negative impact on sales of denim jeans into US.