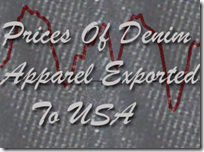 About 580 million pieces of denim apparel were imported into US from various countries around the world in 2009. This apparel included mainly jeans and some small quantities of  denim skirts, denim jackets, denim blazers etc. The average price of all this apparel was USD7.15/ piece CIF US .

It would be interesting to know which were the countries whose exports of denim apparel  to the US were very high priced and which were the ones which were priced low and we can see the marked difference between the two as also compared with the average prices .Lets have a look

Italy , Japan and and Tunisia were the countries from where the denim jeans and apparel were the costliest for imports into US.  Naturally the volume for the same was also much lower as compared to low priced exporters.

As expected Japan had to get the distinction of the highest priced exporting country . However, it was surprising to see that apparel from Tunisia were more expensive that from Italy. It is however to be noted that Tunisia exported much lesser volume to US than Italy.

This is the category of countries most of the buyers of denim jeans/apparel from US are interested in knowing.  Bangladesh, Pakistan and Vietnam were the countries from where these exports were really very cheap.

So we have an interesting matrix where ,against the average price of denim apparel at $7.15/piece, we can see the prices to be as high as $46.50 and as low as $5.20. This also shows the difference in prices  at which jeans and other denim apparel retail in the US – from $9.99(or lower) a jeans to $500 for a pair jeans.