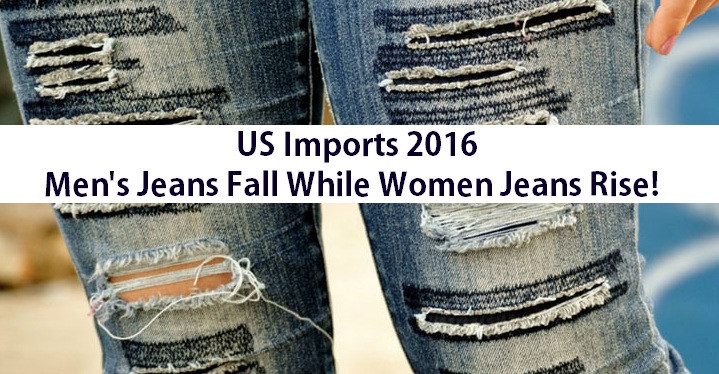 The denim market scenario is US does not look too rosy with the latest statistics coming out. The market saw a down trend with the Men’s jeans imports taking a knock in the first quarter of 2016 . Going down 4.4% in absolute quantities, the men’s denim apparel carried forward the trend of the last few years of slump in demand. Lets see below the data of Men’s Denim and Women’s denim apparel imports into the US in the first quarter of 2016.

The first quarter of the year is normally the slowest of the four quarters.  Though not too much can be predicted for the whole year but the starting of the year does not inspire.

Women’s denim however, does inspire a bit as it  does not go negative and keeps its head over water with a marginal 0.4% growth.

The second quarter would be critical as it would define the movement of the denim demand and the resultant imports from around the world – which constitutes more than 95% of total denim consumed in US.

The denim apparel imports into US peaked in 2013 at about 522 million pcs but slowly declined and fell to 475 million pcs in 2015. It remains to be seen how this year will perform. The initial data is not encouraging !