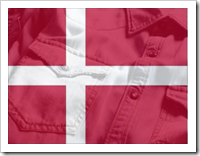 Denmark , with a population of only about      is a small country  compared to many other countries in EU with a population of only about 5.5 million . The Danish apparel retail is valued at over $6.5 billion and is sizeable for the country of such a small population.   The country has a decent consumption of denim garments due to popularity of denims and it is estimated that the per capita consumption is about 4 jeans per person p.a with over 20 million pieces of jeans sold in Denmark.

So where do the jeans come to Denmark from ?

The jeans most come to Denmark in big quantities from

and small quantities from Pakistan , India etc. China enjoyed a market share of about 50% in the total jeans imported into Denmark in 2010. However , within a year , it lost about 4-5% points and the share is being taken up countries like Bangladesh, Turkey, Pakistan and India. This reflects the growing

Looking at the table above , it is clear that China is losing market share rapidly due to rising costs. Also, its surprising to see that Turkey is gaining share – reflecting that speedy turnaround and very high quality garments are required for this market and the prices touching Euro 16+ are not less either.
Bangladesh and India are quickly gaining share of the market though the prices that India gets are far above those of Bangladesh.