Price Of Denim Jeans Imports in 2011: How Much Affected By Cotton Prices? 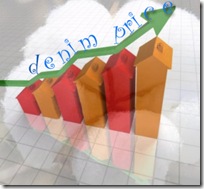 We all know that cotton prices have been killing the textile industry till a few months back . The unrelenting rise in the price of cotton had led to the increase in fabric prices for most of the garment factories and hence ultimate buyers.  The fabric prices were increased by almost each denim mill and sometimes to the tune of 50% or more .  The apparel buyers  and retailers had no option but to bear the increased costs.
However, the prices at the retail level in the major markets of US and EU did not undergo or reflect the changes in the costs. So , how much was the actual increase in prices for denim apparel shipped to US ?

This shows that the various players in the supply chain have absorbed part of the increase in prices . There is also a possibility of impact of cost reduction measures taken at various levels of production and sourcing.

We have also seen that the retail prices in US did not show much of increase and as a result some of the retailers like Gap have to suffer huge loss of income . Now, with the prices of cotton crashing by over 40% , it remains to be seen how the prices of apparel will move. Will these retailers be pressurizing their suppliers to reduce prices significantly to cover their own losses. Will the sourcing price of denim apparel fall to below pre cotton increase levels ?
It remains to be seen. However, the lesson that can be drawn from the entire episode are  that  :