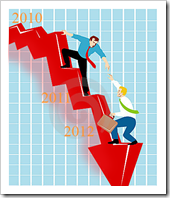 US denim imports had been in a bit of trouble last year with about a 14% fall in total denim imports over the year 2010.  There were expectations that with such a large fall last year, the year 2012 would show some better results. However, it seems that the initial trend may not be very encouraging one.

In the first quarter of 2012 , there has been a further fall of about 8%  in all denim apparels into US . This is significant considering the fall in 2011 . Lets have a look :

Lets see if there has been some impact on the prices too:

Average prices of denim apparel into US : 2012 qst quarter.

There has been an increase of about 10.8% in the price in 2012 over the prices in 2011 1st quarter. But last year was exceptional in price movements due to cotton price scenario and its impact was felt over the next few quarters and continuing still to some extent. Also traditionally , the second and third quarters are better performers than the first and we need to wait and watch how these quarters move.

We can , however, have a look at the figures of the all the four quarters of 2010 and 2011 including quarter wise qty and price movmements. We will also be able to see how 2012 fared compared to the year 2010. It would be interesting to see the price trend over the first quarters of 2011 and as compared to 1st qtr of 2012 and to see if the prices are really increasing !! Rest of the report is visible to our paid subscribers. In case you wish to contact us for more info at , send email at mktg@balajiinternational.com . To see all protected reports titles,visit this page http://www.denimsandjeans.com/subscriber-only-reports-3