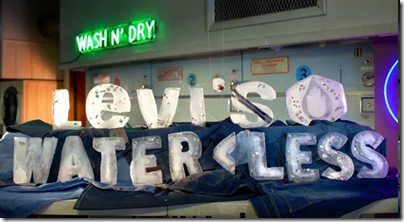 Levi’s has started offering a new collection of jeans which consumes less water .

The logic behind this ?

Levi’s did a ‘Cradle to grave’ study for its 501 jeans and found that about 3480 ltrs of water in its entire lifetime !! . This is a phenomenol amount of water to be spent on a single pair of jeans . The majority of this water is spent by consumers during the washing process of jeans at their homes . Though Levi’s could not control the water that consumers use at their homes, it decided to use the ozone technology to wash its new collection so that it could save 28% of the water that is spent in finishing process.

The Result : A new collection of Jeans from Levi’s which

a)Will save about 10 ltrs of water per jeans .
b)Levi’s expects to sell about 1.5 million such pairs ie about 15-16 million ltrs of water saved.

Here is a very interesting video from Levi’s to explain their concept of water saved in this new collection.

However, though the intention of Levi’s is quite noble, the effort on its part will only save 0.3% of the water that is used in the life cycle of  the jeans.  The jeans manufacturing causes a lot of damage to the environment in terms of its entire production cycle from Cotton growing , to dyeing and weaving and finishing .There is a need to reduce the consumption of not only water but also energy, pesticides and to ensure that wastes are recycled .  There needs to be developed a concerted campaign to draw attention to the damage that is being done and alternative technologies need to be developed for the same.  Eg a number of companies are producing ozone washing machineries – which should be encouraged , lazer washing is another technology which saves a lot of ecological damage .

At consumer level , we need to make the people aware of the need to wash their clothes only when necessary and this applies to all clothes including denim jeans.  Then only it might make some REAL impact on the environment.