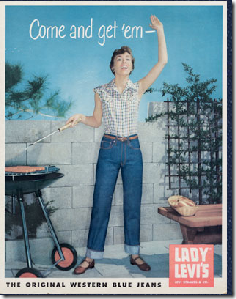 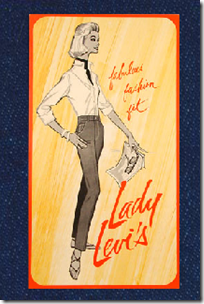 Its difficult to believe that first women’s jeans were introduced 61 years after the men had been wearing them ! . Levi’s had introduced the first men’ jeans – mainly meant for working men- in 1873 . In the Fall of 1934 , it decided to introduce the Lady’s Levi’s Jeans and forever changed the course of women fashion. 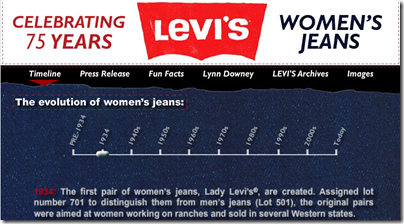 Levi’s would have never thought that about 75 years after the introduction of women’s jeans, the denim fits, finishes  and fabric innovations would be driven by women’s needs and that the sales of women’s jeans would surpass that of men’s (in fact it was done in 2000)!  . Women’s jeanswear are currently leading the denim trends each season and it is difficult to imagine denim seasons without women’s jeans.

Another irony in this 75th year is the popularity of the Boyfriend Jeans  and Skinny Jeans trend . Despite the latest high finishing techniques for women’s jeans , today’s most popular styles – The Boyfriend and Skinny Jeans – trace their ancestory to the earliest jeans developed by Levi’s. In the early 1900s, when women had no options available for them , they used to wear the men’s jeans and the Boyfriend Jeans was a ‘Fashion by compulsion’ or due to ‘Lack of choice’.

The evolution of women`s jeans: