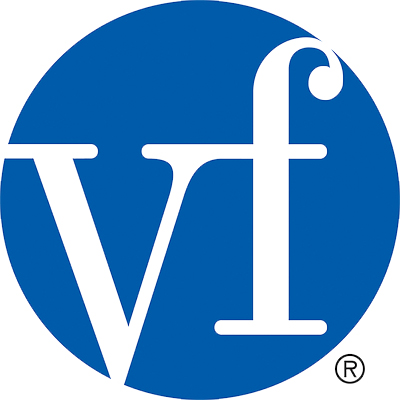 VF Corporation reported financial results for its third quarter ended September 30, 2017 recently . Below are some of the highlights :

“VF’s third quarter results were strong, fueled by accelerated momentum across the company’s international and direct-to-consumer platforms and our Outdoor and Action Sports and Workwear businesses. Based on the strength of our third quarter performance and the stronger growth trajectory we see for the remainder of 2017, we are again increasing our full year outlook and making additional growth-focused investments aimed at accelerating growth and value creation into 2018 and beyond. VF remains committed to returning cash to shareholders as evidenced by the increase in our dividend, which is supported by the strength of our balance sheet and the confidence we have in our strategic growth plan”,said Steve Rendle, President and Chief Executive Officer 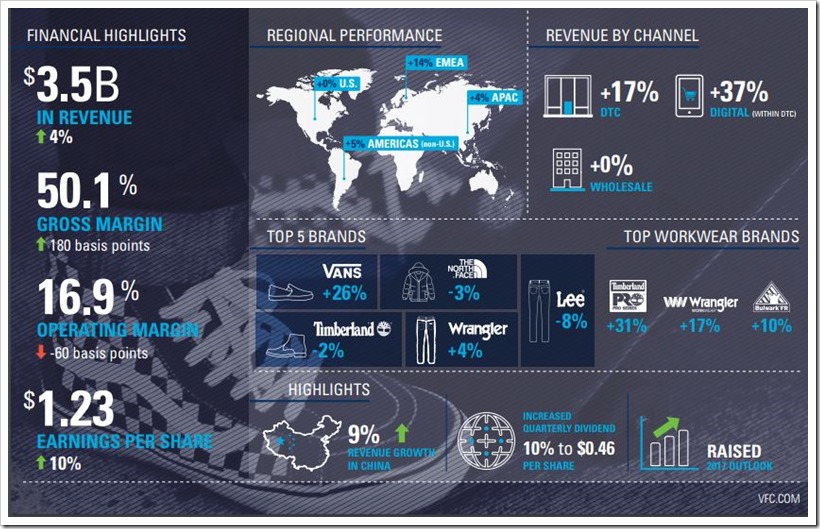 Though there is an increase of 5% in total revenue for this quarter ended on Sept 30 , 2017 , but going into deep we found that the Jeanswear is loosing its revenue by 1% after comparing the figures of the last year for the same quarter. Sportswear has nil growth in terms of revenue and the uncategorized segment ( Other) has declined by 6% in this quarter. Imagewear and Outdoor & Action Sports are the two biggest gainer in this quarter with 9 % and 8% growth in their revenue respectively .  Outdoor & Action Sports is the biggest contributor in the revenue with 71% share in the total however Jeanswear contributes only 20 % . 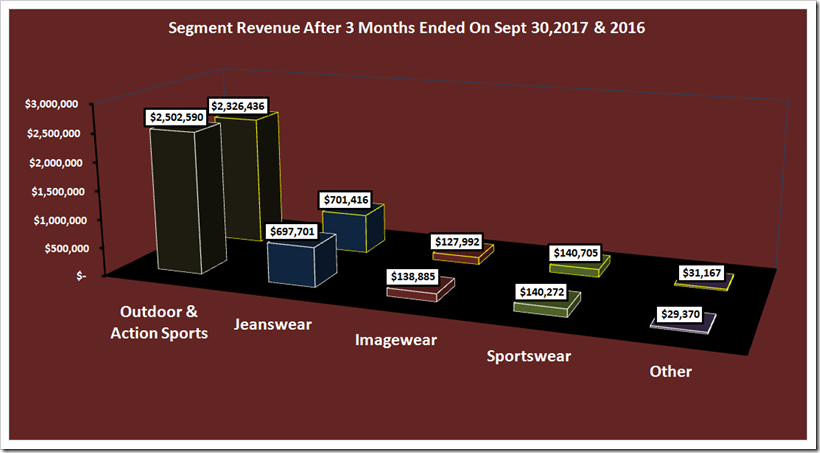 With the summation of the revenue of 9 months of this year ended on Sept 30 , 2017 , we noticed the overall growth of revenue is 2% . Outdoor & Action Sports and Imagewear marked a positive change of 5% in the revenue however the rest segments including Jeanswear and Sportswear are on adverse growth . Jeanswear reduced by 5% while the revenue of Sportswear by 6% . 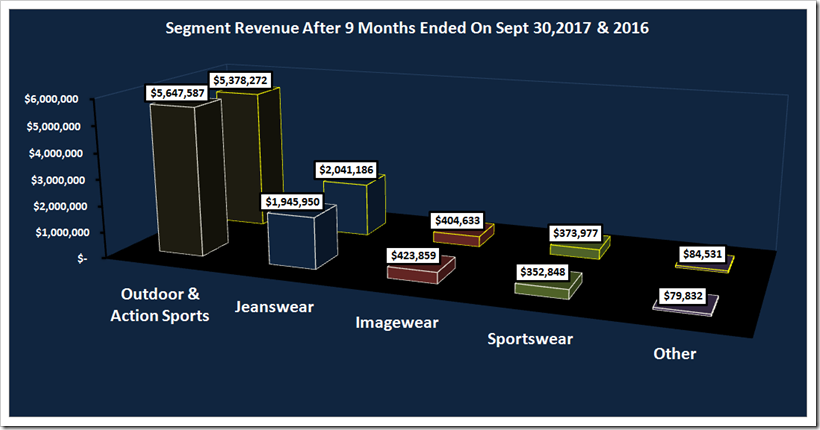 While there is a growth of 5% in revenue , the profit has been increased by 2% only for the quarter ended on Sept. 30 ,2017. Out of the total profit of USD 684 million 76% has been contributed by Outdoor & Action Sports and 18% by Jeanswear . Jeanswear’s profit has been reduced by 15% in this quarter however the uncategorized segment lost by 116 % . Sportswear is the biggest gainer in this quarter with 16% rise in profit . Outdoor & Action Sports increased by 7% this quarter . 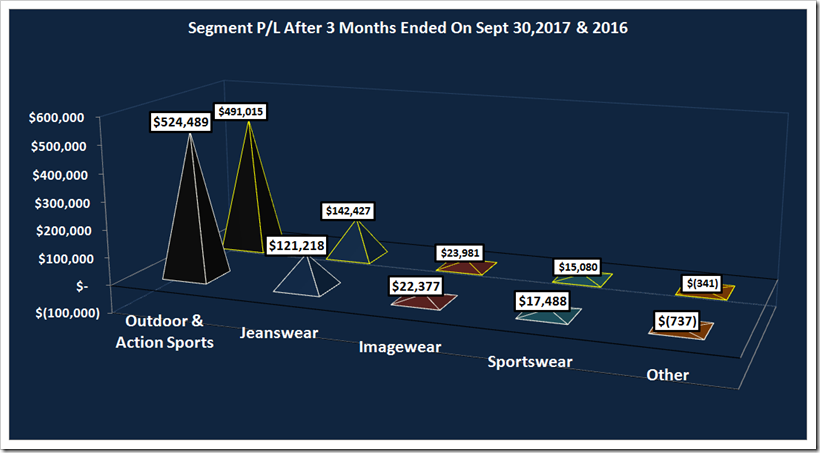 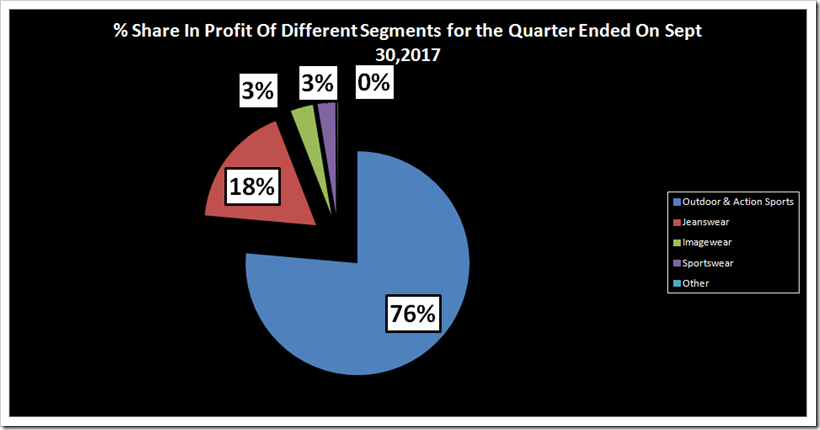 While analysing the profit for 9 months , we noticed the reduction in profit by 2 % . Jeanswear lost the profit by 17 % while there is a rise of 6% in profit for Sportswear. Outdoor and Action Sports registered a fairly reasonable growth in the profit of 4%  while Imagewear is on declining side with adverse growth of 3%. 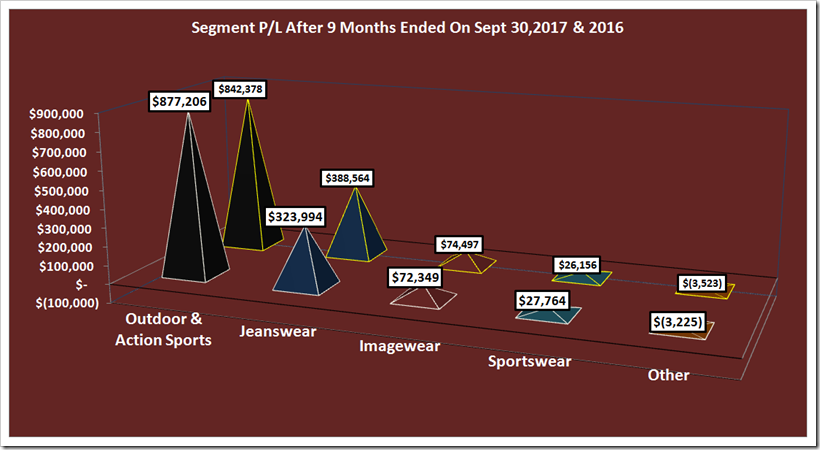 Looking at the below analysis , there are many surprising facts we came to know , some of the following are below : 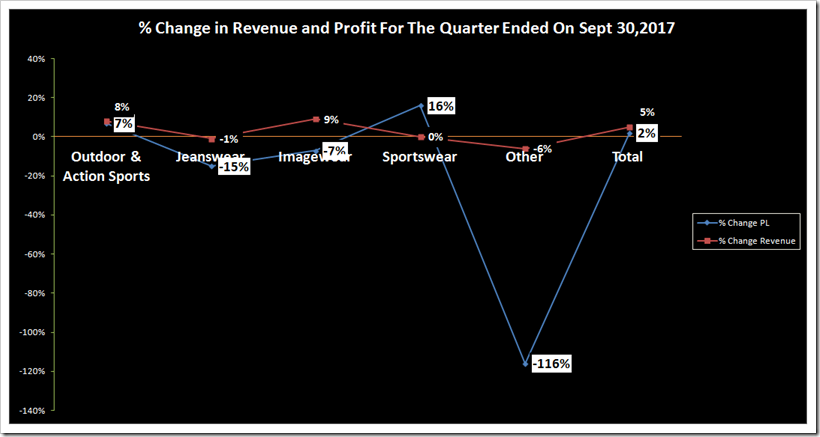 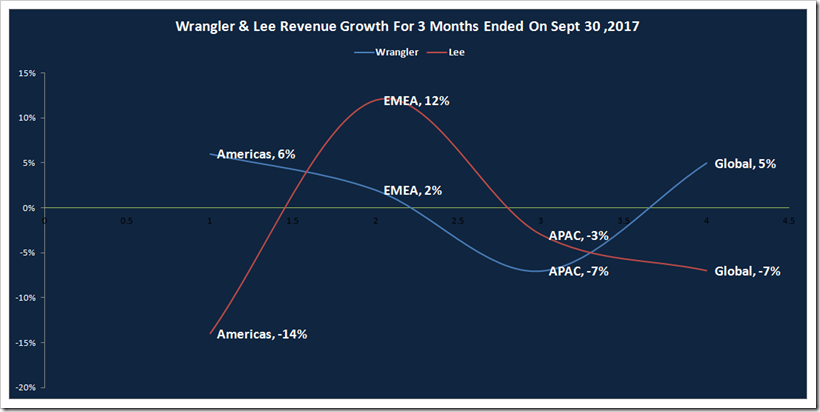 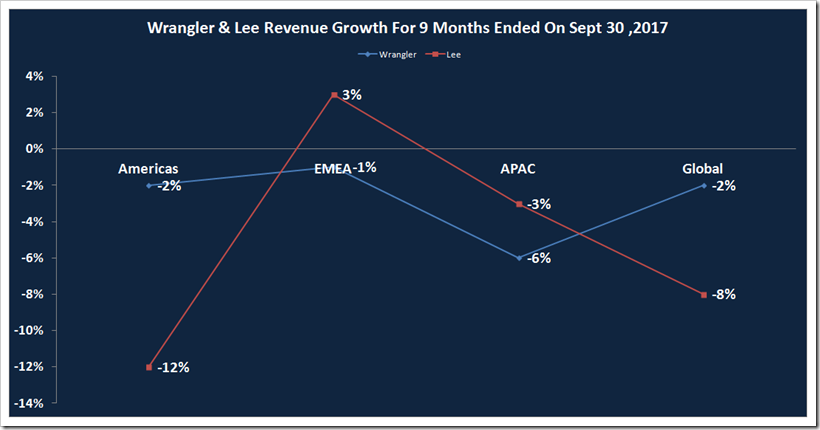 VF Corporation outfits consumers around the world with its diverse portfolio of iconic lifestyle brands, including Vans®, The North Face®, Timberland®, Wrangler® and Lee®. Founded in 1899, VF is one of the world’s largest apparel, footwear and accessories companies with socially and environmentally responsible operations spanning numerous geographies, product categories and distribution channels. VF is committed to delivering innovative products to consumers and creating long-term value for its customers and shareholders. For more information, visit www.vfc.com. 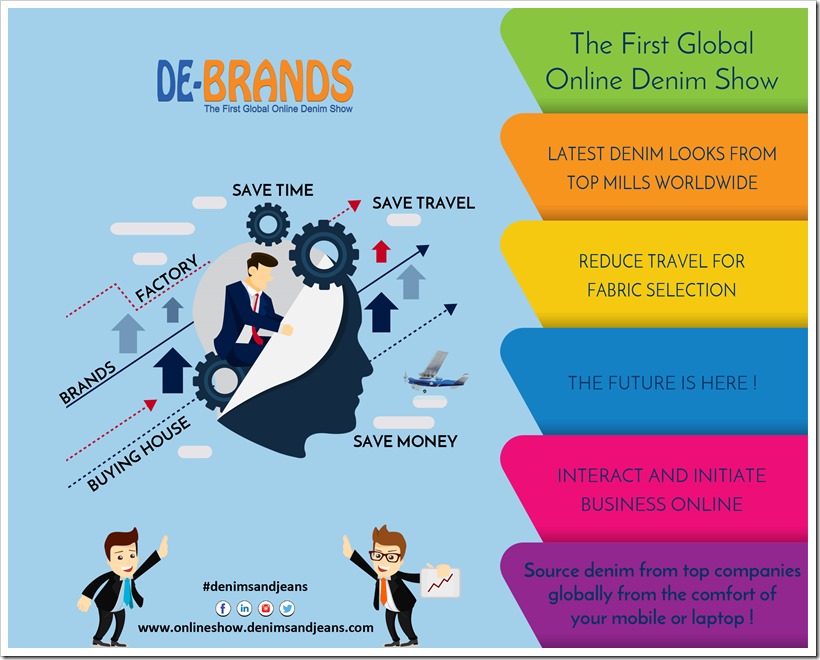