Gap Inc, one of the most reputed denim  apparel retailer , has released its financials for the first quarter of 2017. In this report , we have done a detailed analysis of revenue & profit of their brands : Gap Global , Old Navy and Bananna Republic . There is also an  analysis on the geographical distribution of the revenue and profit of their respective brands for Q1 compared to same period in 2016.

The table below shows the net Sales of The Gap Inc, for 1st quarter 2017 (Million USD). The net sales for Gap Global is USD 1,158 Million , Similarly for Old Navy Global it is USD 1,562 Million , for Banana Republic Global it is  USD 517 Million , and for Others it has a net sales for USD 203 Million .Out of total revenue of USD 3,440 Million , USA is leading the charts with the revenue share of 79% in the whole however Europe has merely a share of 4% . 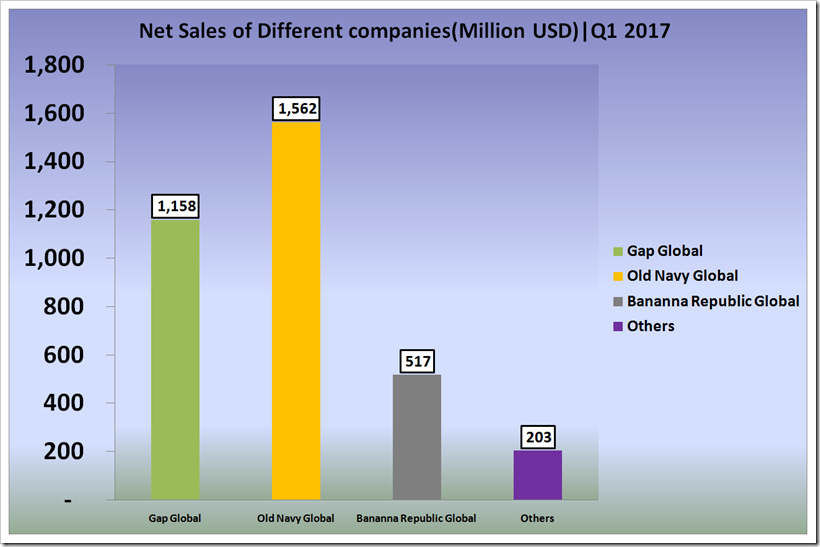 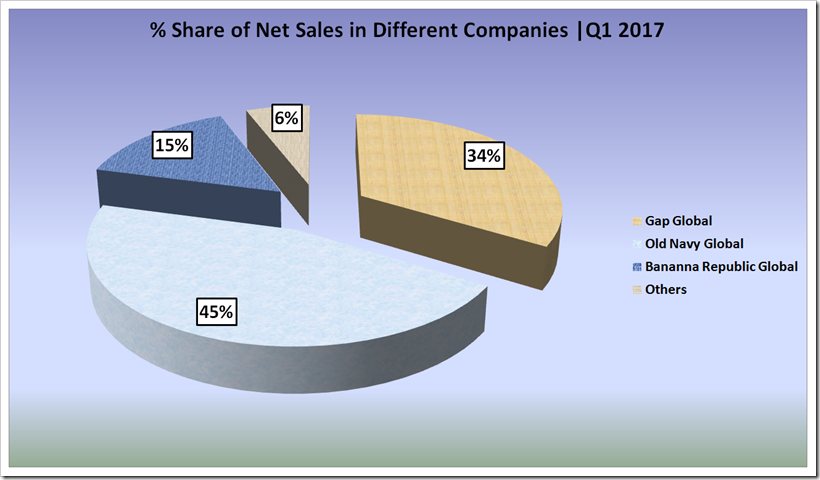 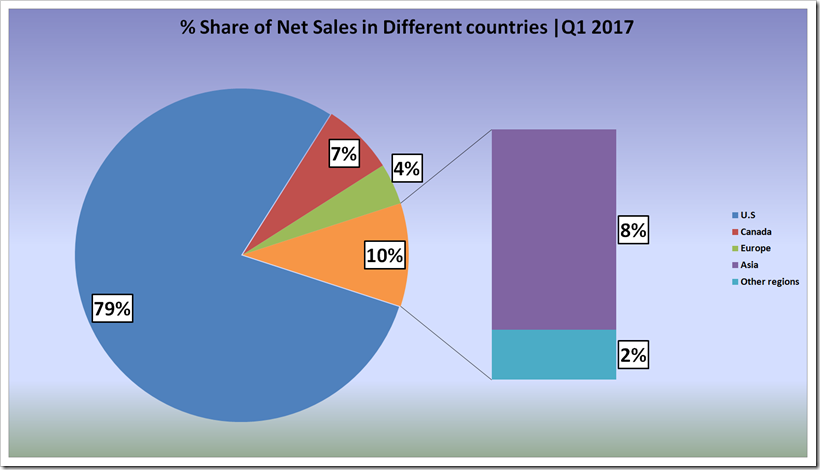 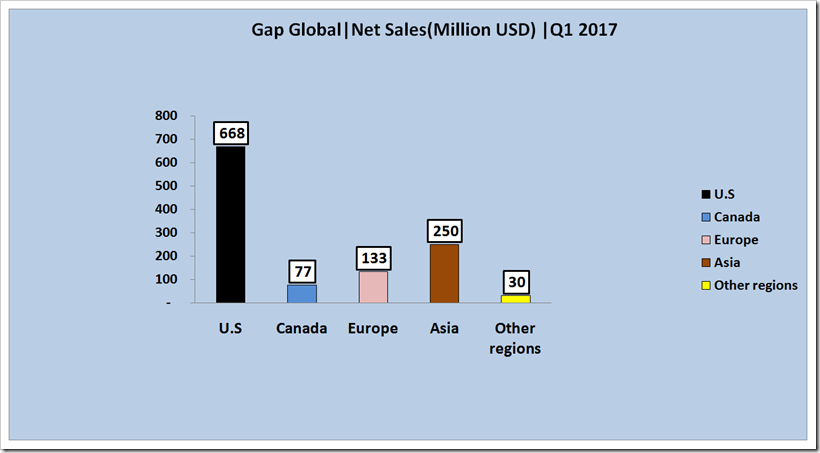 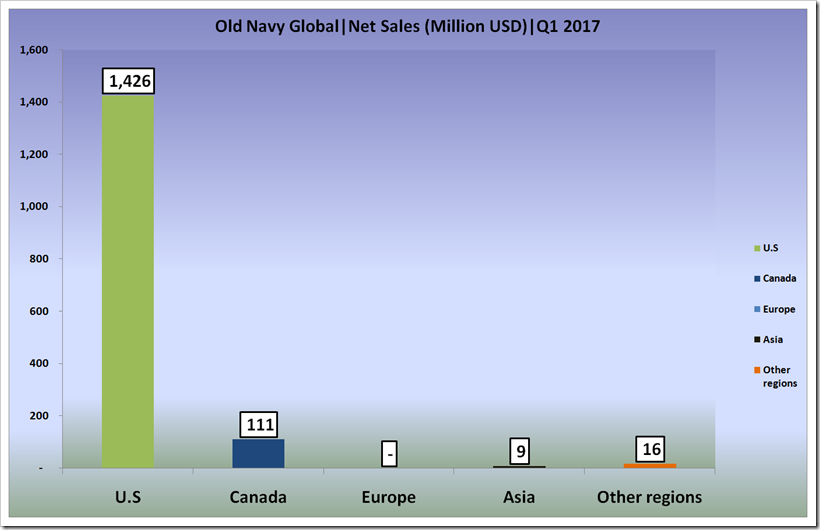 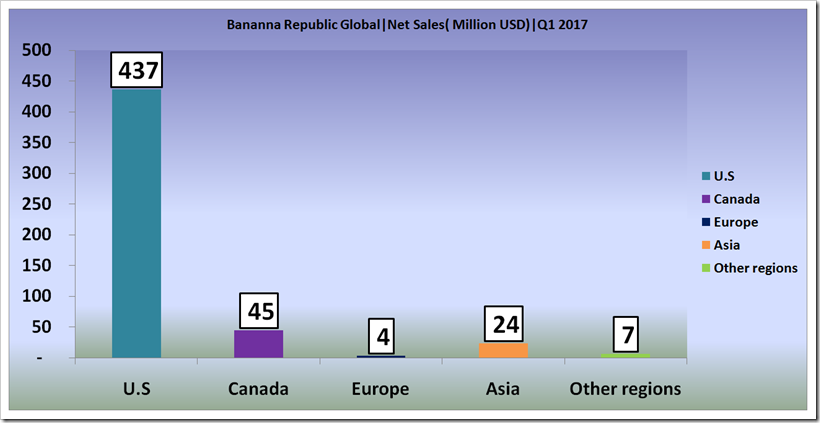 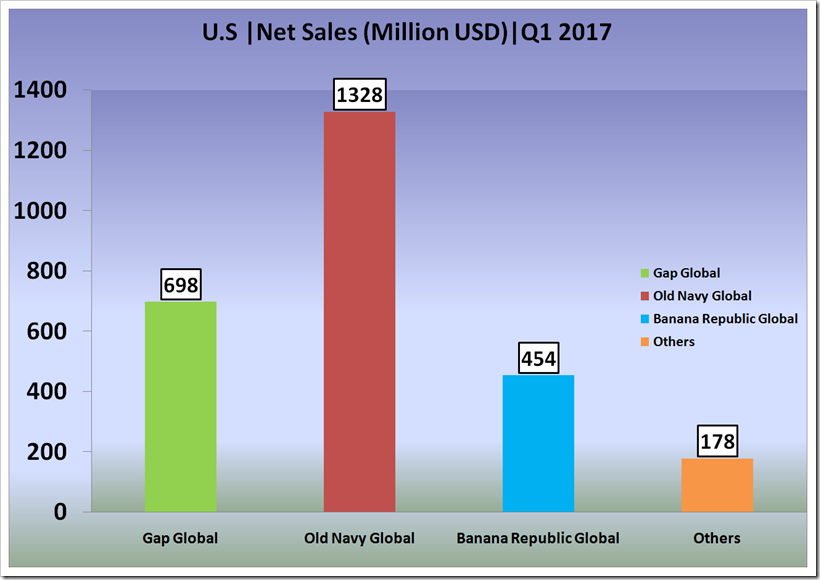 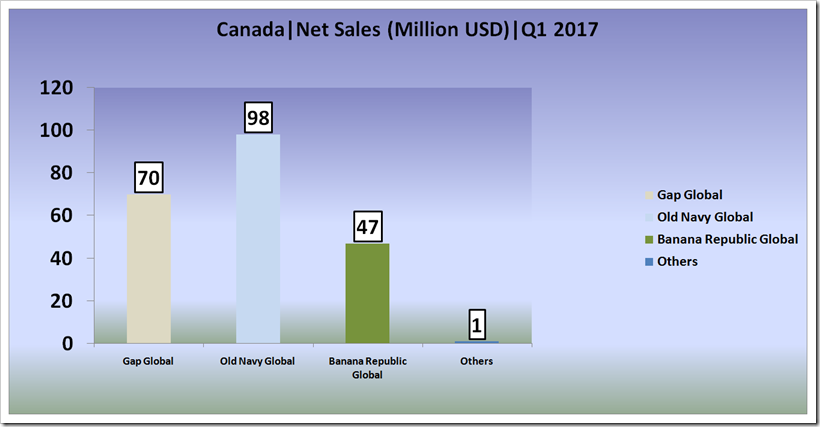 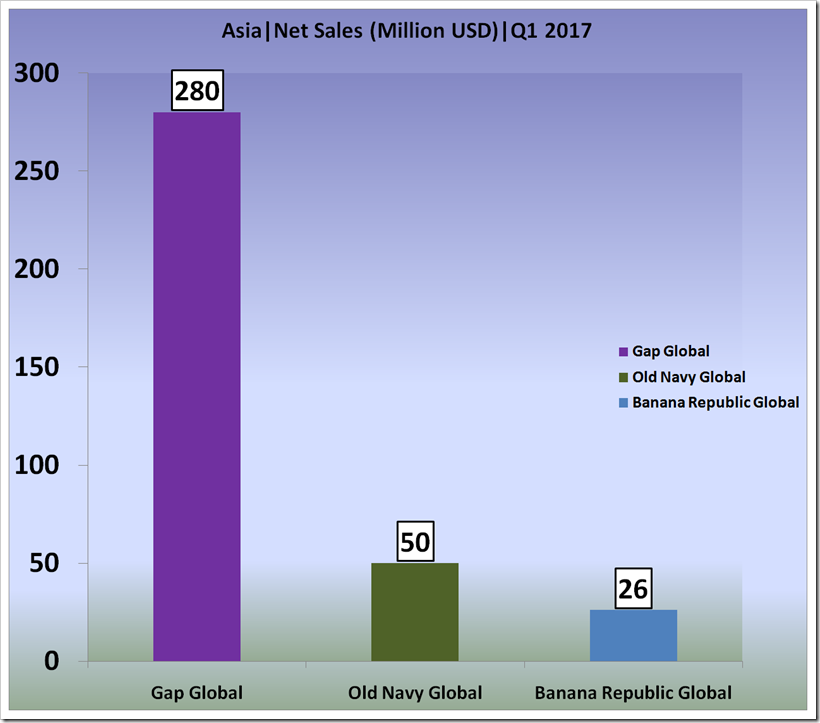 The comparative study gives many surprising statistics about the ups and downs of Gap revenue coverage over different regions. Sales in USA have growin by 2% however the Asia sales are down  3% and the reason might be the infiltration of many retailers like H&M and Zara which cut down their prices to take over the shares of their competitors. The equations have been changed over the years and for the retailers of  mid range denim , the market has become pretty difficult due to low in demand and frequent change in consumer behavior . Recently , H&M achieved the sales of USD 120 million in India within 6 months of starting operations and that too with handful stores which is very encouraging however it sets the balls on rolling for such markets.  It seems that GAP is not able to perform in any other market except US and this is perhaps the reason for its almost static sales. The company will have to devise strategies to be present in a stronger way in these markets as most of the growth is happening in Asia and GAP is currently kind of lost in these markets. 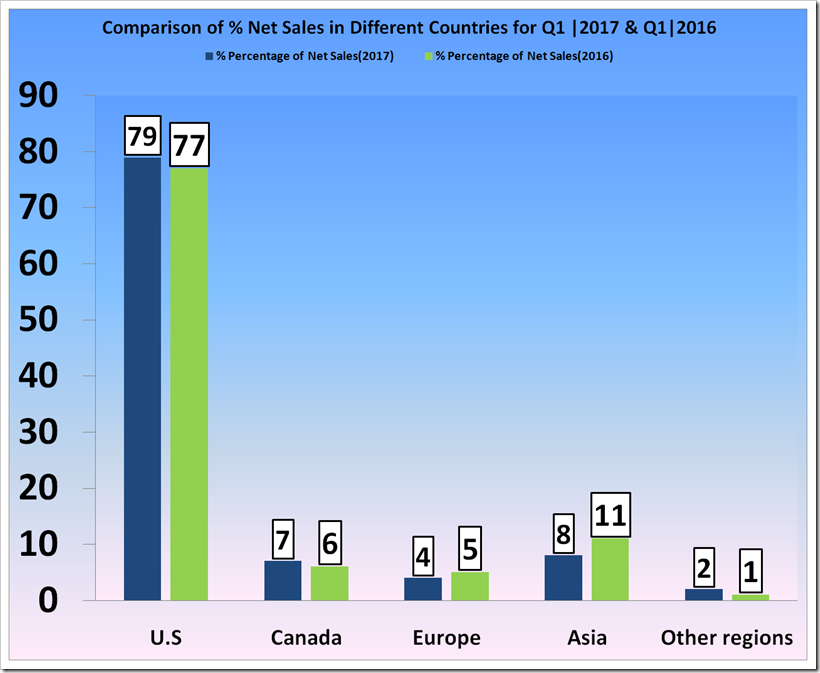 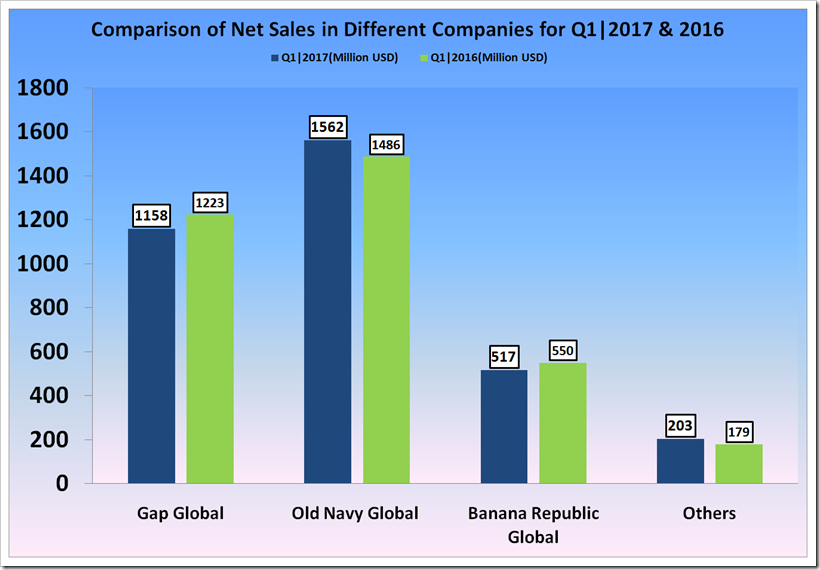 Within a span of 13 weeks , the company has closed 23 of its stores worldwide however opened only 9 . Gap North America is the biggest looser with 9 closer of stores followed by Gap Asia with 6 .  Old Navy North America seems to be growing as they have five new stores while only one store which has been closed during this quarter . With a Total stores of 3200 in the beginning of Q1,17 , the company is left with 3186 stores at the end of the quarter which includes 23 closer and 9 new additions to fleet . 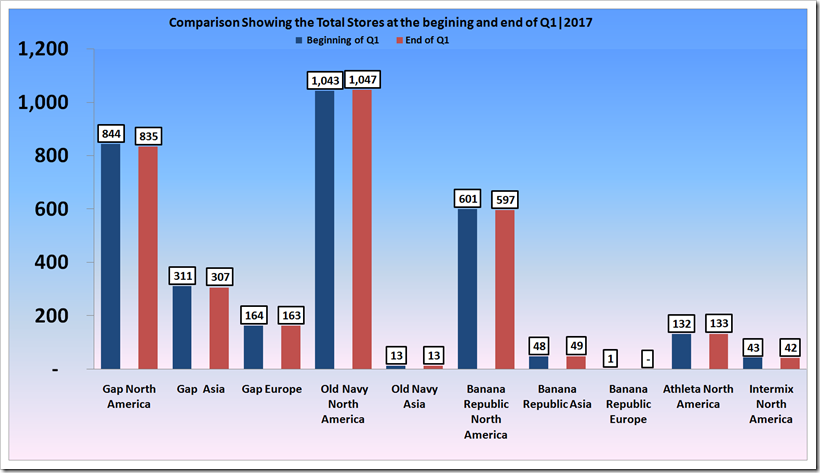 Welcome KilimDenim From Turkey at the First Edition Of Indian Denim Show by Denimsandjeans India . The Show is scheduled on September 25-26 at Hotel Lalit Ashok , Bangalore . Please register at  https://lnkd.in/fvsdfak to get the official invitation of show . 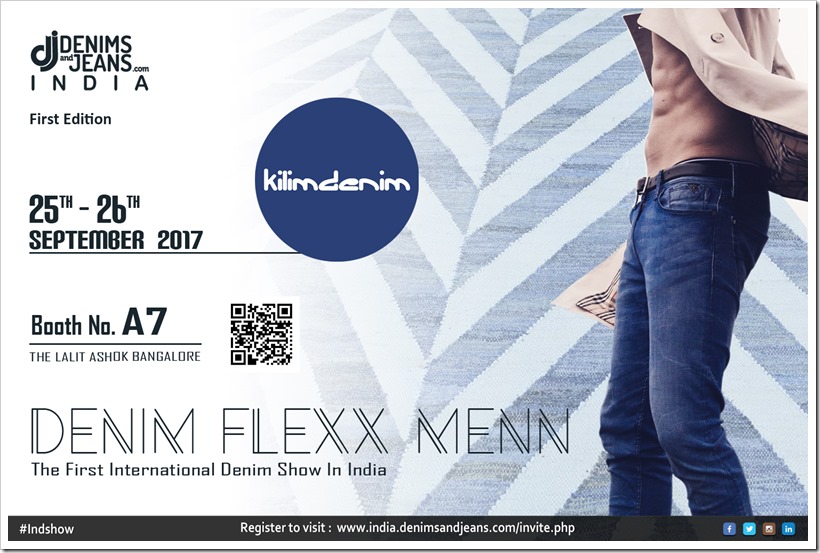