Indigo Blue Dye: Not Only Blue – Some Interesting Facts 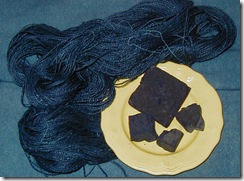 Indigo has been in use as a blue colorant for thousands of years as a natural dye, which was produced from the Indigophera plant in India and China and with woad in Europe. Indigo cultivation was introduced in the Americas in the 18th century, first in the West Indies and then in South Carolina. Indigo has throughout history been the colorant most in demand and current production levels are reported to be around 17,000 tons per year. Indigo was employed as a blue dye for wool primarily, until the 20th century, in fact, Indigo is a better dye for wool than cotton, being much easier to apply. There was another natural Indigo that was produced by shellfish at the eastern end of the Mediterranean Sea, known as Tyrian Purple, famous for producing the “royal purple” shade in antiquity. This dye is chemically different from the plant-derived Indigo only by the presence of bromine in the structure.

In 1897, the BASF company began marketing synthetic Indigo which 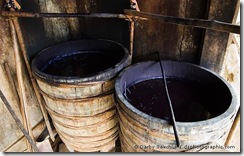 greatly increased the supply of Indigo-dyed fabrics. Once the technology for production of synthetic vat dyes was developed, a wide range of new colorants based on Indigo were available by the 1920’s. The COLOUR  INDEX , published by the Society of Dyers and Colourists in the 1924 edition, lists 54 colorants that were variants of Indigo !. The color range included the

In the 19th century natural Indigo was commonly used for printing and many of these new colorants were used for printing, especially of calico fabrics. The blue Indigo that is familiar as C.I. Vat Blue 1 is also referenced as C.I. Pigment Blue 66, when it is applied in printing.

– C.I. Vat Blue 5 produced by brominating Vat Blue 1 in nitrobenzene. In the 1990’s one U.S. denim company, Avondale, used this dye on a small 12-rope range to produce a fabric that was wildly popular in the fashion denim business.

– C.I. Vat Red 41, a bright red thioindigo which can be produced with 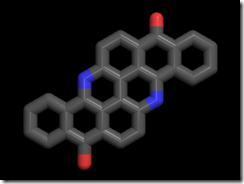 thiosalicylic acid. This is a very versatile vat red in that it can be blended with blue Indigo in alkaline sodium hydrosulfite as in normal Indigo dyeing, be applied like a sulfur dye with sodium polysulfide in continuous or batch opertions as well as garment dyeing. Thioindigo possesses the unusual characteristic of photochromism, changing color on exposure to light. One way to test the dye in order to assure that it is thioindigo, is to disperse it in chloroform in which the color shifts from a violet to a yellowish-red.

– C.I. Food Blue 1 is produced by sulfonating Vat Blue 1 in order to

produce 5,5′ indigotin disulphonic acid. This version is also listed as C.I. Acid Blue 74 and when insolubilized with aluminum salts becomes C.I. Pigment Blue 63. The highly-pure Food Blue 1 is used for coloring beverages, toothpaste, candy, mouthwash – in short, anything edible that is blue will use this form of Indigo, as well as use as a hair dye. Indigo has also been long in use to produce the blue color in fireworks !.

Is Indigo Safe For Living Things?

Indigo is so safe for living things that is has long been used to color medical sutures of  polyester, which is required because undyed-white sutures appear much like nerves and when the surgeon removes the sutures, the color prevents a nerve from being mistakenly cut. Originally, medical sutures were dyed with Indigo with solvents under pressure, but since then Indigo is dispersed in melted polyester resins, which are then extruded as filaments.

Vintage Denim – At What Cost To Environment ?

All forms of Indigo exhibit the special brightness that is characteristic of the Indigoid structure and a full range of Indigo colors can be achieved readily on standard Indigo dyeing equipment by blending. Most of these dyes have steadily disappeared from market, having been largely replaced by the anthraquinones, however, they are simple to produce and perhaps there is a dye supplier that is interested in marketing this range of dyes, especially for the denim market !.