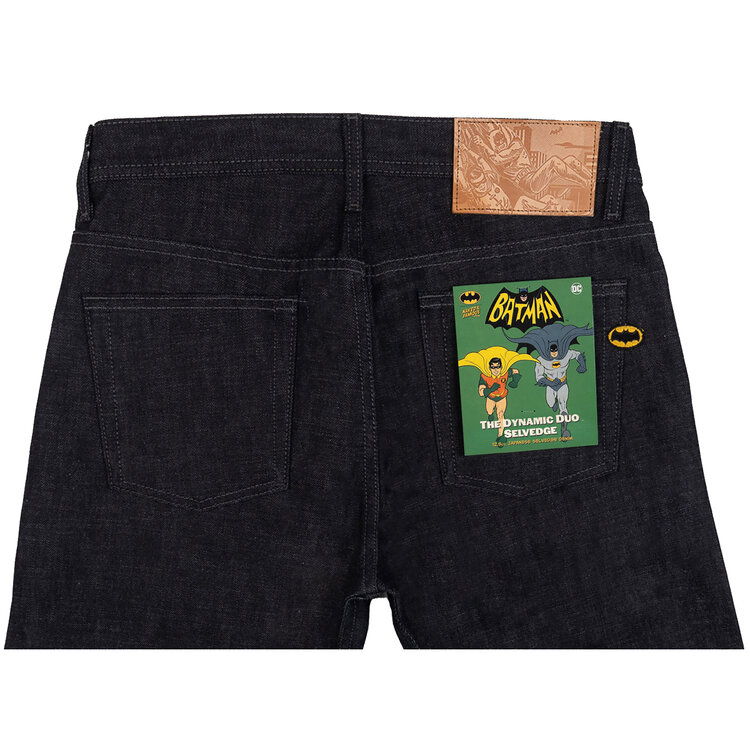 The collection features exclusive custom milled Japanese denim fabrics produced with labels, embroideries and other iconography of characters from the Batman universe – featuring the classic 1966 Batman & Robin Dynamic Duo, the Dark Knight himself Batman, Bane, Harley Quinn, and the Clown Prince of Crime himself the Joker. Each style is distinctive and features iconography unique to each character with custom buttons, embroidery, as well as highly detailed embossed leather patches.

The Dynamic Duo Selvedge is a 12.5oz Japanese selvedge denim made in the spirit of the 1960’s Batman television series. The indigo warp and grey weft evoke Adam West’s Batman costume, and the action visuals from the TV show POW, ZLONK, ZAP, and BIFF are woven into the selvedge.

Dark Knight Selvedge is a 16oz Japanese selvedge denim inspired by Frank Miller’s Dark Knight Returns. The heavier weight black x grey denim harkens back to Batman’s musculature and costume. The Bat symbol is embroidered onto the back pocket. The waist button has been cast into the Bat Signal from the Dark Knight Returns.

THE CLOWN PRINCE OF CRIME SELVEDGE

The Clown Prince Of Crime Selvedge is a 12oz Japanese selvedge denim made in the spirit of the Killing Joke graphic novel. The indigo x purple denim weaves the Joker’s signature color into a classic indigo warp.  The selvedge ID laughs maniacally, HAHAHAHA.

The Purple Core Selvedge is the latest in the colored-core series from Naked & Famous Denim.

Rope-dyed indigo denim usually starts with a white yarn that is dipped into a dye bath and removed before the dye can permeate all the way through the yarn, leaving its core white. So, with time and wear, the indigo dye chips away to reveal the white core. Wearing away the indigo is what makes denim fade so beautifully. With the Purple Core Selvedge, however, that yarn is first permanently dyed purple before being dipping in indigo.

On first glance, this fabric looks and feels like typical raw Japanese selvedge denim, but instead of fading to white, this denim will fade to purple. The purple selvedge ID is a preview of what’s to come, and the pull-up leather patch can be stretched to reveal rich tonal variation. Available in the following fits: Super Guy, Weird Guy, Easy Guy

The Purple Core Selvedge is a 12.5oz Japanese selvedge denim. The fabric starts looking like classic raw Japanese selvedge denim, but most rope-dyed denim starts with white cotton yarns. These yarns are reactive-dyed bright purple before being rope-dyed in indigo vats. So, with wear, the indigo yarns will chip away to reveal their bright purple cores. Cut, sewn, built in Canada with contrast stitching, a Dark Blue Pull-Up Leather patch, and silver metallic buttons and rivets.

De-Brands – The 1st online B2B denim sourcing platform, announces the launch of 1st digital launch of AW22 denim collections and is planned for the listed exhibitors of De-Brands and would be one of its own kind of launch event in the denim industry. The event will be online from the 7th of April onwards.

This special digital launch brings the collections of leading denim companies from India, Bangladesh, Pakistan, Turkey, Europe, and the USA on a common virtual platform.

The buyers can simply log in to the platform and check the AW’22 collections of the exhibitors. With a wide variety of media to explain the collections, it will be easy for them to understand collections from a number of companies in one go!