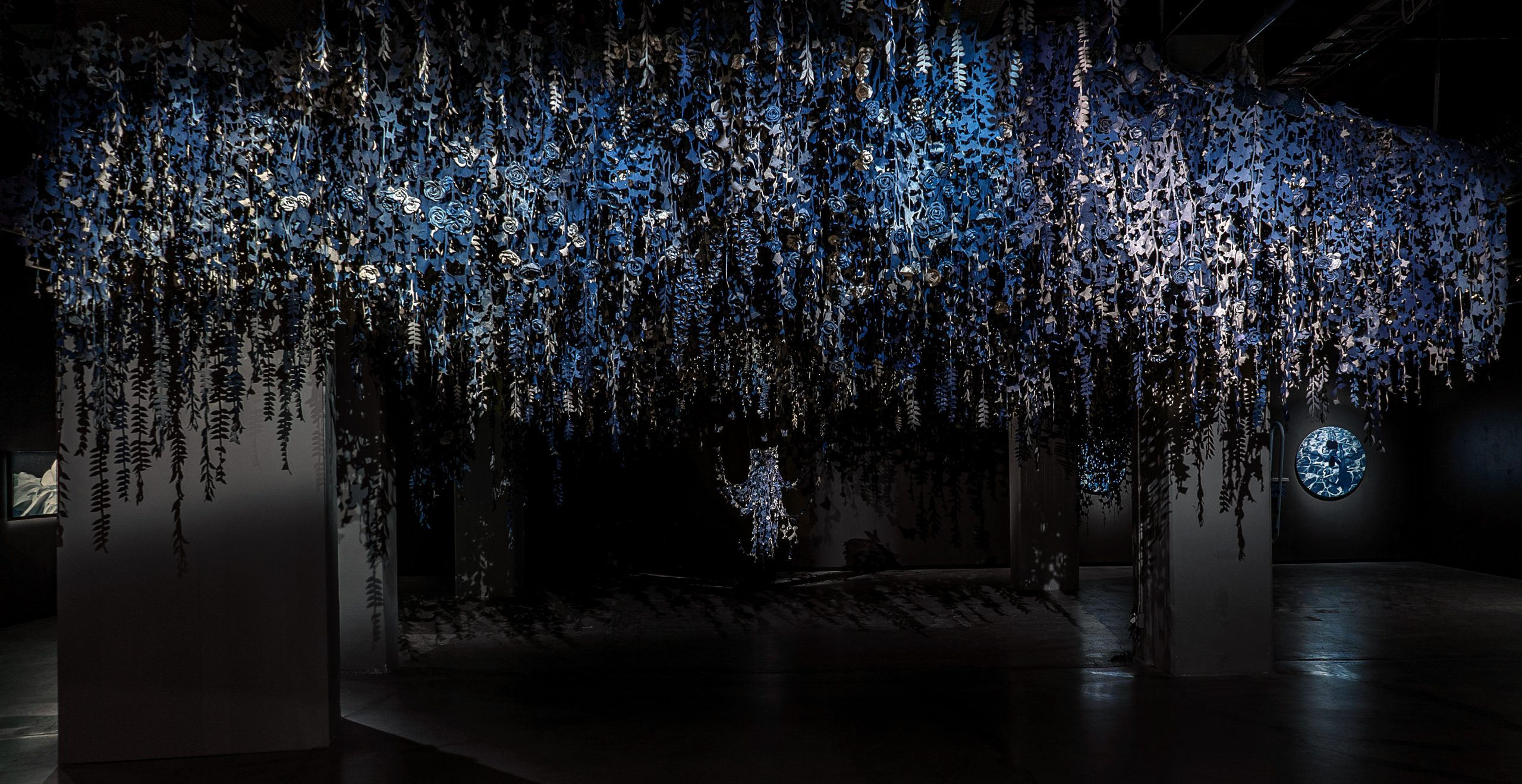 He’s done it again! Ian Berry has just opened a show in Sweden, the country he lived in for 5 years to open the solo exhibition Material World at Textil Museet in Borås Sweden – the National Museum of Textiles and the Nordic region’s leading museum on the subject and it looks even better than the last.

The Textil Museet shows some of Berry’s most well-known pieces never seen in Sweden before but often on this site – large (denim) ‘canvases’, made with layers of recycled jeans, creating photorealistic yet often melancholy scenes out of the indigo fabric he is known throughout our industry and the world for.

To celebrate showing a large collection of his works at Textil Museet Ian Berry has collaborated with Dutch fashion designer Jonathan Christopher to create garments inspired by his most notable bodies of work; Behind Closed Doors, Hotel California, and the Secret Garden installation, amongst others, that debuted at the museum and looks stunning.

The Secret Garden installation touches on subjects such as sustainability and the environment, and once more Berry collaborated with our friends Tonello in Italy for the washing and lasering and with Cone Denim. It showcases this material made from plants turning back into plants, with hanging wisteria, flowers and vines falling from the institution’s ceiling and making this even more special is the beautiful black room making the install even more magical. Within the Garden now, Jonathan Christopher has made a beautiful dress named Cunae- Cradle which looks elegant and fragile.

‘Everything we have and take starts from nature, we alter, we add, and we consume. Once we have used it, it will return to nature with all the harmful chemicals and additives we used.’ Jonathan adds.

‘The dress is representing mother nature with her vines connecting the circle of life. Where the butterflies symbolize the butterfly effect we have on mother nature. We create our own toxic environment where our harmful practices aren’t able to be undone by nature and things like microplastics are found in the animals, soils, and plants.’

Sustainability is also at the core of Ian Berry’s friend Lill O.Sjöberg’s innovation. Making denim wood, TWOOD, is the Swedish designer’s latest innovation and the pair have come together to exhibit two pieces that compliment Ian Berry’s work that looks back at the history of denim – specifically that of Rock and Roll. TWOOD shows both a guitar and a drum kit made of wood created only with denim scraps and displayed with the album covers from Ian Berry’s much loved 2012 Record Store.

Of course, Ian Berry’s specific medium is denim, and the famed industrial city also has a textile and denim heritage and is home to the national museum. Within the same complex is the Swedish school of Textiles, a part of Boras University. It’s one of the world’s leading courses, if not the leading course on textile innovation and sustainability. A number of the students came to help Ian Berry in the install. His show Material World also helps the city celebrate its 400 year anniversary.

Ian Berry is asking, who is your favourite Denim Legend? You may have seen online already the question being asked and it has continued into the museum.

It could be from the cowboy actors, 50’s rebels, the punks of the 70’s to the influencers of today. Who inspired your denim looks or who do you feel had the biggest impact on denim? Over the last year, he has been asking this question and using his wealth of knowledge from working with the material over the last 15 years has already created dozens of portraits from Brooke Shields to Bardot, Marley to Moss, McQueen to the material girl living in her own material world -Madonna. As he creates one of his largest works, he asks the audience to help shape it – it may even end up with a Swede in now! It may mean some of the portraits already made will get rejected so the piece will form the greatest influences from Pop Culture, making the Denim Legends.

The temporary install in Sweden will grow and evolve over the period of the show, which is six months to May 1, adding in new Denim Legends as people and experts add their own opinion. The install at the moment also includes mannequins dressed in the distinctive style of some of the most famous, like Marilyn’s Lee Rider, Brando’s jeans and leather and Hendrix’s frays.

The portraits are exhibited in an area where visitors can submit their choices and also watch short videos of the making of and some of the icons in action in the films, music, and ads they helped make denim so popular in.

Malena Karlsson, Curator at the Textile Museum of Sweden, says

“Ian Berry’s work is interesting and important on so many levels. There’s the ‘wow’ factor of the craft, the thematics, and the way in which his art shows how the textile material forms yet another dimension in art”,

It’s not a photograph, it’s jeans!
At first sight, it is easy to mistake Berry’s work for blue- or indigo-tinted photographs, but a closer look reveals that they are made up of layer upon layer of denim in different shades. The contrasts between the different shades of blue visible in a pile of old jeans were the genesis of Berry’s unique art form. Soon, he began to explore the possibilities offered by the material and create photorealistic artworks. Berry only uses upcycled denim in his works. No colouring agents or bleach are used – only scissors, glue, and second-hand jeans.

Berry was born and raised in Huddersfield, England, which like Borås has a long-standing textile tradition. Over a decade ago, Ian Berry moved to Sweden and exhibited his art at galleries in Skåne and Motala. Since then, his art has been exhibited all over the world, most recently at Museum Rijswijk in the Netherlands and in Genoa, the Italian city that leant its name to this favourite garment, jeans with his portrait of Garibaldi. The Textile Museum of Sweden is the first Swedish museum to exhibit a large, in-depth exhibition of Ian Berry’s works.

Ian Berry and Lil O.Sjöberg have been friends for several years. Ian says ‘she’s a humble genius’. She is based not far the from the Textil Museet in Gothenburg and has worked with the Smart Textiles there. Ian Berry and Lil were together before the pandemic but since could only talk online, but together they came up with the idea to use the wood to make a drum kit, a nod to Ian’s show about the music connection to denim. There is also a denim guitar all exhibited with Ian Berry’s albums from the 2012 Record Store installation.

This material research project by Swede Lil O.Sjöberg and her collaborators explores the possibilities to extend the lifecycle of denim fibre with a new innovative recycling technique, creating a new material TWOOD [textile-wood], and is made just had wood is created beautiful contours.

The aim of this ongoing part of the project is to identify and develop the industrial processes. The goal is to produce material prototypes and evaluate the material specifications to target usability for the next step. With the material, she has been able to make items that range from tables to a beautiful denim Twood guitar and drum kit, the latter with the help of ICE percussion/Kjetil Granli.

Ian Berry and Jonathan Christopher collaborated to base wearable garments on many of his pieces. Having turned down many brands and designers over the years it is great to see this idea coming to life with the tiled floor of Behind Closed Doors, incorporated into a bomber jacket, the ripples of the pool making a full suit and the showstopper, the garden morphing into a dress based on the vines and flowers of the secret garden. Walking into the museum the first thing you see in the darkened room is the dress framed in the beautiful garden and long with Ian Berry’s Denim art, the black walls make them look stunning.

Jonathan Christopher (Hofwegen) Celestial Risher is a menswear designer who graduated from the Willem de Kooning Academy in 2009. After which he did his MA at Artez in Arnhem. Next to his own brand, Jonathan Christopher, he has worked for brands such as Karl Lagerfeld and was chosen by Marc Jacobs to be one of the five finalists for Designer for Tomorrow by Peek en Cloppenburg.

In 2014 he won the very first Global Denim Awards and in 2015 he won the Woolmark European Finals. He now works on a new brand St.Ape, basing the idea around using deadstock fabrics from high-end designers, to make his collections of limited editions, as he has throughout his career. Reusing old materials makes him a perfect and authentic collaborator for Ian Berry.

For these garments, he also worked with his own long-term collaborators with Paolo Gnutti of PG denim with their many innovations and fabrics.

‘Jonathan Christopher is a special creative that understands both designs as well as making himself, understanding the whole production line. As an artist who for most of my career has only had for the main part, solo shows, it has been nice to work with others on creating something and if I’m honest because we brought together some of my best pieces from different bodies of work, it is Jonathan’s creations that I find bind the show together. I remember when he won the first Global Denim Award and was there that night and his show blew my mind.

Welcoming visitors into the museum as you mount the stairs is a giant Jacket that Ian Berry collaborated with Henry Wong of AGI denim to produce. It creates an imposing figure over the entry in the museum and combined with the giant badges, made in the denim of some of the music histories denim legends it complements the show together with the Denim Legends Portraits and the Twood musical instruments. With giant sewn patches it is perhaps an indication of how denim became mass and too big via popular culture.