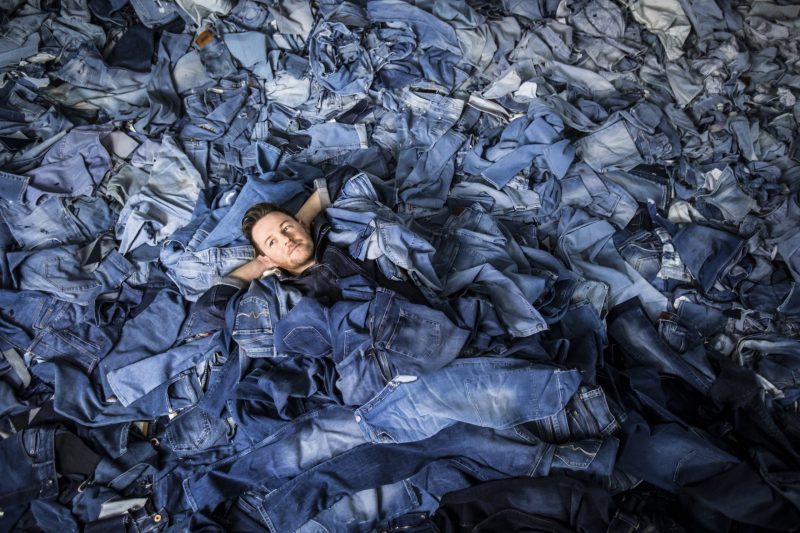 Levi Strauss was born in the German town of Buttenheim and the museum there to celebrate their famous son turns 20 and they will host a special exhibition by Ian Berry with all his works out of denim – no dye, no bleach, no paint – just layers of jeans.

Ian Berry , in turn , celebrates 15 years of working with the material and garments made so popular by the man who emigrated the German town in 1847.

From Sunday (September 13th) until November 8th the exhibition examines the years of artist Ian Berry’s work crafted out of only blue jeans and will show amongst the memories of Levi Strauss who is immortalised in the dedicated museum in the house he was born in.

For any denim lover, it is worth a visit to the home of Levi Strauss to see his fascinating life and materials but to see it with the famed artists’ work is an extra treat.

Levi Strauss was born in 1829 in Buttenheim, the town in the district of Bamberg. In 1847 , he would emigrate to the USA – finally settling in San Francisco and hitting gold with his patented pants with the development alongwith Jacob Davis.

The museum opened in September 2000. With the biography of Levi Strauss, visitors can gain an insight into the lives of the rural Franconian Jewish Community, the world of the immigrants, the beginnings of the textile industry, and of course, all about our favorite material – jeans.

Levi Strauss house is one of only a few preserved objects from his life and one of the oldest houses in Buttenheim . The district council bought it in 1987 and today is classified as a historical monument. A wide scale renovation of the dilapidated half-timbered house was done to bring it to as true to the original as possible. Imagine Levi walking around!

When the Museum first opened back in 2000, hardly anyone anticipated its rapid success. Nevertheless, both Museum guests and professionals have seen the Levi Strauss Museum become a popular success. Every year, thousands of people visit Buttenheim from all over the world in order to experience the Museum and see where it all began.

This will kick off two years of museum shows for the Yorkshire born artist. Many works will be on display including from the Behind Closed Doors and Hotel California collections that will move on to Holland, to the Museum Rijswijk in November and the National Textile Museum of Sweden (Textil Museet)

During the Covid period his work took on a new life, having spent years portraying isolation. His Behind Closed Doors body of work became life for many of us . He had painstakingly crafted beautiful homes out of only denim but with a haunting scene of loneliness.

It will be Berry’s first showing of his work in Germany and he will be there to meet the guests at the opening that will , of course , be under social distancing rules. There will be a projection of his famed #iclapfor project.

‘When Dr Tanja Roppelt , the curator , got in touch with me a couple of years ago it made sense – the old romantic in me loved the idea of the work showing in the birthplace (of Levi Strauss) . I love the history of denim, especially that of Jacob Davis and Levi and the Rivet.’ – Ian Berry

All of Ian’s plans for the year were shattered with COVID. As he works from photography all the shoots were cancelled in the first week of lockdown so he has had to change his direction for the year. Many people sent him photos of their home isolation and this saw the birth of the Stay Behind Closed Doors project, I myself contributed and you can see in the latest Sportswear International.

Then, along with his son Elliott, 6, he made the two applauding hands. Clapping for the health heroes had been a big part of British life for the first ten weeks of the Covid period.

Ian’s son was particularly captivated and it enabled Ian to explain more what was going on while he was engaged. What started as a personal project between father and son, ended up being beamed all over the world via projections. It covers the whole of the UK and Ireland and was seen as far as Australia, Colombia, Mexico City and Brazil amongst many others. He was raising money for the NHS and Doctors Without Borders and got fine donations from Cone Denim , Tricia Carey at Lenzing. It became the #iclapfor campaign and a short documentary film will be shown at the museum.

Ian, originally from Huddersfield , lives and works in East London amongst thousands of pairs of jeans that he recycles to create almost photorealistic pieces and installations. He has been named a top 30 artist under 30 in the world and now he will show at a historical home of one of the materials of our time.

We wish the Museum every success into the future.

Advt:
Denimsandjeans is happy to announce the 2nd edition of its virtual show to be held on Oct 14-15 bringing to together global denim supply chain companies at one platform again .
To visit, please register at: https://virtual.denimsandjeans.com/vi…