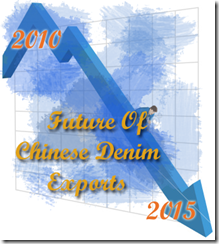 The era of Cheap Chinese denim is over – says a report by Telegraph , UK.
The rising labour costs in China coupled with the effect of Cotton price is killing the Chinese denim exports. The retailers who had a great time buying very cheap denim and retailing them as low as $5 – $10 will now have to shelve out much more amounts to get similar quantity .

Xintang , the Denim capital of the world – with over 260 million pieces of denim production and a very large quantity of jeans production is the worst hit . This city is DEDICATED TO DENIM with over 5000 factories from the very small ones to those who make over 60,000 pairs of denim  a day can be found here. The quantity of jeans produced here is so high that the Pearl River which flows nearby has actually turned Indigo Blue !!!

So what’s ailing Denim Production in Xintang and China in General ?

So What Does Future Hold For Jeans Manufacturers In China ?

With the current trends, it seems that the jeans manufacturers in China – especially South China –are going to have a tough time making money. They can only survive if they get high priced orders – which are few to come. This will lead to the survival of the fittest with many factories having to either close down or to shift to alternative products.  China may still manage to have the productions shifted to inland China where costs are low, but they cannot do it overnight. It will take a long time .

What are the alternatives to China for sourcing denim garments ?

A number of other countries in the vicinity have developed their industry and are coming up well – whether its Cambodia, Vietnam, Bangladesh etc. However, none of them has the capacity to produce the volumes or has the infrastructure to match that of China.  Even countries like India and Pakistan would benefit  directly by way of increased garment exports or indirectly by way of increased fabric exports.  It will take time for them to come up and match the potential of China.  The US and EU are encouraging these alternative destinations as production centres , one of the reasons why EU passed the New GSP Regulation.

Will all the impact on prices of denim products , can there be a scenario where the demand for denim products actually fall as the retailers try to promote alternative products ?  We have already seen a massive fall in imports of denim products in US in the last quarter of 2010. Is it an indication of things to come ?