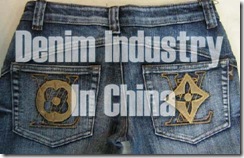 Hong Kong and Taiwan started to produce denim fabric and apparel in the mid-70’s. To take advantage of cheaper labor cost and abundant resources, Hong Kong manufacturers later relocated their factories to the mainland, mainly in Guangdong, Shanghai and Jiangsu province, about three decades ago. The Guangzhou No. 1 Cotton Textile Factory and the Shanghai Shenshi Textile Company were the first two Chinese companies that manufactured denim fabrics and apparel from cotton.

Xintang, Kaiping, Jun’an and Dachong of Guangdong province are the major denim manufacturing bases in South China. Xintang wholesale market is the world’s largest for denim apparel. Xintang houses over 2600 denim related factories and produces about 31% of total Chinese denim production. The top three export markets for Xintang are US, Panama and Hong Kong.

Kaiping : Three hours drive southwest of Guangzhou , Kaiping has developed a comprehensive denim production chain from raw materials to garment sewing. The area has over 450 companies involved with the denim industry with a denim related turnover of over US$ 600 million .

Ju’nan : An another area of  important denim manufacturing base in China is Ju’nan  where over 1000 denim related companies produce over 100 million mtrs of denim apparel each year ! .

Costs of denim production. Are they increasing ?

Labor Cost :Denim production requires skilled labor and the cost of skilled labor seems to be increasing in China with some factories claiming the monthly cost of skilled labor to be in range of US$ 190-220 and this cost is on the increase. The Chinese Labor Contract Law implemented on 1st Jan 2008 require the employers to the employee’s social security fund – which has further increased operational costs (around $30 per person per month).The increased costs have pushed many factories to relocate to less developed regions in central China, such as Hunan province and Jiangxi province
Environmental issues : According to the Chinese Ministry of Environmental Protection , the textile dyeing industry discharges over 7.5% of national wastewater. Only about 7 % of the waste water produced by the textile industry is recycled . The Pearl river delta is one of the most polluted areas in China and the main reason for this pollution is denim production.The denim manufacturers are  being forced by the government to recycle and reuse effluent waste chemicals such as dyes.  The pressure from the US and the European governments , the Chinese textile manufacturers are forced to upgrade their technology and manufacturing facilities – forcing add on costs .

Denim By PV At Shanghai Oct ‘12

Appreciation of Yuan : Yuan has appreciated over 8% during the period from 2007 to 2009 and that has again eroded the margins . The currency is further expected to strengthen in the coming times and will further affect the margins of the manufacturers.

Export rebates : But where on the one hand, the costs are increasing, the government has increased export tax rebates for textile and apparels to balance the same. The same was increased on 1st Jan 2009 to 16% from 11% . This has helped the industry suffer the impacts of increased costs , exchange rate losses etc.

The denim industry is China is still growing and with increasing costs, it is trying to upgrade itself with new technology, product innovations , design skills, local brand development . To take  an example , a  Zhongshan denim factory has adopted the latest nano technology to produce lighter and more durable denim fabric.