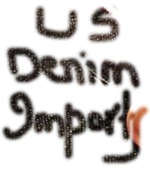 Reflecting a continuous slide in production of jeans in US, the denim fabric imports fell by about 18% in the first four months of 2014 (Jan-April) compared to similar period in 2013. The quantities of denim fabrics imported from around the world reduced from almost all major exporting countries including China, Mexico, Japan , Taiwan etc.  The quantity of about 9.7 million sq mtrs was imported in 2013 and this fell to about 8 million sq mtrs.  The table below shows the quantities both in sq. mtrs and in linear mtrs (at a standard width of 150cm) imported from different countries in 2014 vs 2013

As seen in the table above, China remains the highest exporter to US for its fabrics – though it is estimated that much of this fabric goes for re-export to Latin American countries. Mexico , Japan, Taiwan and Italy come next in the rankings and export some quantities (not large) to US. These fabrics are mainly used for premium denim products made in US. But as we can see that the imports have been falling continuously for a few years and this is reflective of the fact that the usage of imported fabrics for jeans mfg. is falling in US.

The prices from different destinations to US are given in the following chart. As expected, Japanese prices are the highest . Turkish prices are very good and surprisingly higher than Italy. Indian prices are unexpectedly the lowest .

It is clear from above data that the imports of denim fabrics to US are under a continuous fall reflecting a falling usage of imported denim for production and , if we may generalize, a falling US production of jeans as fabric produced in US is not on an increase.