Bangladesh is a major exporter of denim jeans to EU27. Being low priced and with special and indefinite duty free and quota free access under ‘Everything but arms’  initiative to EU , Bangladesh continues to dominate the EU denim import business.  Currently, it has about 19% share of the denim jeans import market in EU27 countries.

Lets have a look at the figures of imports of denim jeans from Bangladesh for the last 10 years . 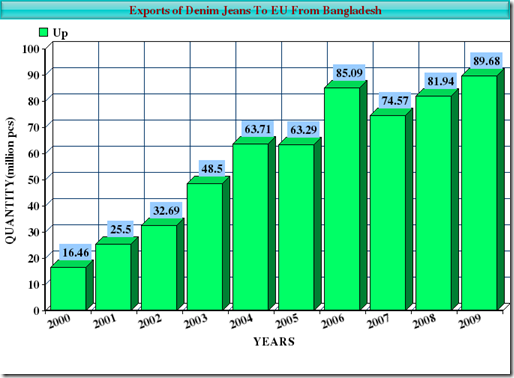 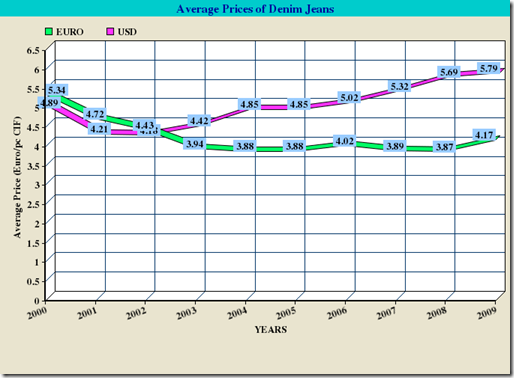 In the table and chart above, we can see that actually the prices from Bangladesh are quite different than what Euro prices show. We can see that since 2002 the average prices  in Euro terms (from 2002 to 2009) have declined by more than 5% whereas there is an  uptrend in dollar terms  and the prices have increased from $4.43 per piece in  2002  to $ 5.79 in 2009 – actually showing an increase of  about 30%

Dollar being the ruling currency worldwide, gives  a better picture of the prevailing price situation and it clearly reflects that the prices from Bangladesh are continuously and steadily rising over the years. This is despite the fact that the volumes have increased manifold during this period. The Bangaldesh denim export industry is only expected to grow stronger in the coming times . We have seen a number of denim mills also come up in Bangladesh and this strengthens the supply chain making it easier for Bangaldesh to go deeper into these markets.

Also check : Exports of Jeans from Bangladesh to USA