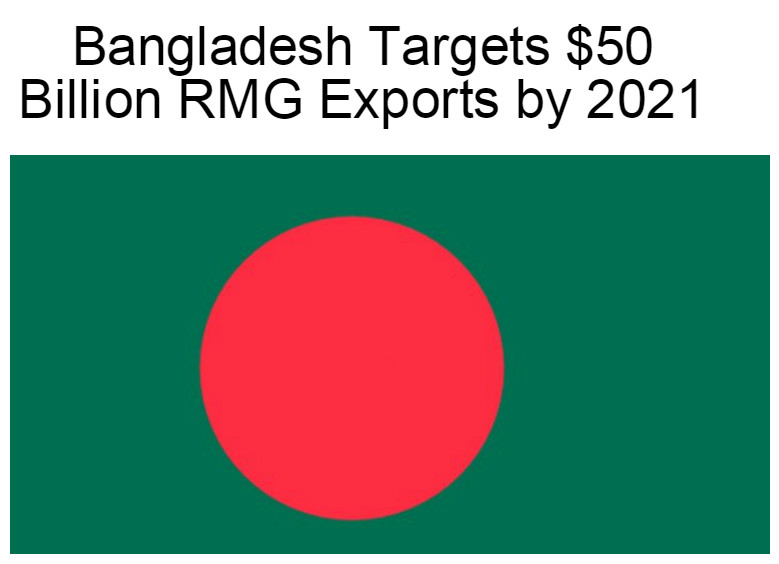 A 3 day apparel summit was recently organized by  BGMEA (Bangladesh Garment Manufacturers and Exporters Association)  –‘Bangladesh RMG 2021- 50 billion USD in 50 years’- with Alliance, American Apparel & Footwear Association (AAFA), German Development Council and others to chalk out a sustainable road map for the ready made garment industry to reach this ambitious target by 2021 when Bangladesh would be celebrating its 50th anniversary . Garment exports have been the mainstay of Bangladesh’s exports for last many years and have been rapidly growing and forming the major part of the exports from the country. The following table brings out figures of exports of apparel from Bangladesh in the last over 2 decades. From a 32% share in exports from Bangladesh in 1989, the RMG exports now constitutes over 80% of all exports . All the figures have been taken from the data published in an article by the BGMEA President – Mr Md Atiqul Islam- during the apparel summit.

All figures in US$ millions
* A number of least compliant factories have closed down after the incidents in last 2 years.
** Latest figures to be updated

During its growth over last 2 decade and more, the RMG exports from the country has grown well over 15% and has overcome (and is overcoming) many of the challenges that are coming in the way including child labour, MFA phase-out , social compliance etc. The tragic incidents in the last 2 years has further provided the impetus to overcome major challenges that come up as a part of growth in most developing economies. Despite adverse publicity after the Rana Plaza incident, the RMG exports growth during 2013 was about 13.8%.
The report published by BGMEA sites a number of important reports published by  international organizations bringing out the positive sentiment on sourcing from  Bangladesh.

MckinseyForecast , Summer 2014
McKinsey & Co. surveyed 29 chief procurement officers in 2013 at leading apparel companies responsible for a combined purchase of Euro 29 billion. They found that Bangladesh remains at top of the list of apparel –sourcing markets expected to grow in importance in the next few years.

US Fashion Industry Association Forecast, June 2014
The ‘Benchmarking Study’ published by the US fashion industry in June 2014 mentions that 60% of the respondents say they expect to somewhat increase sourcing from Bangladesh in the next two years .

The trade confidence index rose sharply from 103 in 2013 to 141 in H1 2014 as per HSBC . This index is second highest in a sample of 23 countries. The authorities are introducing more safety regulations to the garments sector and this appears to have provided an additional boost to confidence.

Gradual reduction of bulk apparel production by China as rising costs, socio-economic and livelihood uplifts, shift to high tech industries has made large apparel buyers concerned to shift their sourcing from China to other countries . Bangladesh has become the biggest beneficiary of this outcome. China occupied (as per WTO) a 37.35% share in global clothing exports in 2011 whereas Bangladesh occupied about 4.83% (which has increased slightly now). This huge gap is also reflecting on a huge opportunity for Bangladesh as it strengthens its position as second largest exporter and positions itself to take a large part of the ‘ China apparel export cake’.

It is interesting to note that Bangladesh is also exploring new markets and diversifying its exports and going beyond the traditional exports to EU and US. The share of apparel exports to markets other than EU and North America was 6.88% in 2008-09 and increased to 14.71% in 2013-14. The new markets include Japan, China, India, South Korea, South Africa, Russia, Brazil, Mexico and Chile. The duty free access and preferential market access by countries like India, China, Korea and Malaysia have helped this process.

To achieve the target of $50 billion, there will be significant challenges which Bangladesh will have to overcome , specially related to infrastructure. Lets see how it stands among other Asian countries in Global Competitiveness . The ‘Global Competitiveness Report 2014-15 (World Economic Forum) evaluates important apparel exporting countries on their Infrastructure quality.

The above table shows the areas where Bangladesh still needs to work in relation to infrastructure improvements especially Roads and Electricity . Besides, availability of skilled work force would be another important aspect which would be very important for growth. Investment in education and training would be paramount to raise a large and skilled work force.

The target of $50 billion is very  ambitious but still not entirely unachievable if one sees the growth achieved in last 5 years as exports doubled from $12 billion to $24 billion. However, the country needs to work really hard in improving its infrastructure and ensure a larger supply of a skilled workforce to reach the magic milestone.

Denim apparel is becoming an important part of exports from Bangladesh . In 2013 , the combined exports of denim jeans and related apparel to US and EU were over $ 1.2 billion with about 65% going to EU and balance to US. If we consider exports to other nations, the value would be still higher. The exports are set to increase further as Bangladesh overshadows Chinese exports to these regions in next 2 years and becomes the number 1 exporter of denim apparel. Already its exports of men’s jeans to EU is greater than that of China.