An interesting report by Li and Fung brings out some of the important aspects of the Chinese apparel market and shows how it is growing rapidly making it an important destination for the brands worldwide.  Here are some excerpts from the report….

Top apparel companies by sales are : 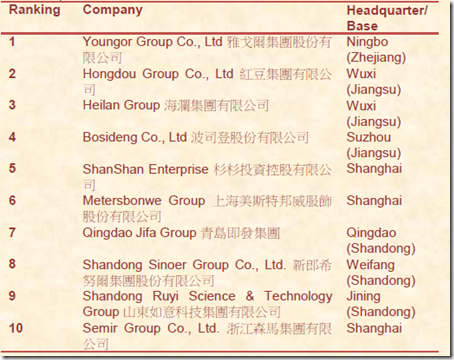 How are foreign brands expanding in China :

Established players accelerate their expansion in China
− Zara planned to expand to 42 cities in China in 2011.
− Uniqlo targets to open 100 stores in China each year starting from 2011.
− H&M expects China to be one of largest expansion markets in 2011.

Some enterprises, especially luxury companies, prefer to retain full control over the ownership of Chinese operations from franchisors or distributors. − Bestseller, which owns ONLY, VERO MODA, Jack & Jones, etc., retained control of shops in Xi’an and Jinan; it also opened more direct-owned stores. − Burberry bought 50 of its Chinese franchised stores in a deal worth 70 million pounds .

Online retailing is getting very important in China and accounted for about 3% of total apparel sales in 2010. This is a good number and expected to increase further . Apparel continues to be the most favoured product category for online purchase.

The market shares of top 10 brands in different sub sectors are given in the bar graph below. It is interesting to see that many sectors have a huge share of the market dominated by top players. 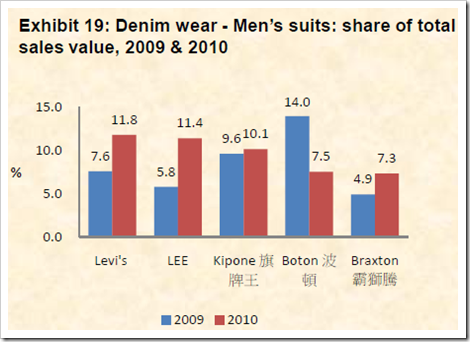 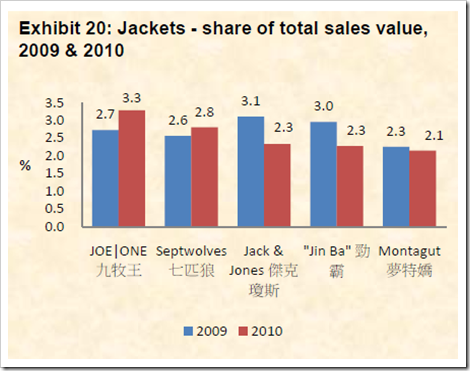 The Chinese market will get more important as the buying capacity of buyers increases there.
Chinese market is already larger than the US market  when it comes to denim fabric consumption and it is expected that over the years it shall maintain its growth and shall continue to be the  leading country in denim space.