Gap Inc, one of the most reputed global apparel retailer , has released its financials for the second quarter of 2017. In this report , we analysed in detail  revenues & profits of their brands : Gap Global , Old Navy and Bananna Republic . There is also an  analysis on the geographical distribution of the revenue and profit of their respective brands for April – June’17  compared to same period in 2016.

The table below shows the net Sales of The Gap Inc, for 2nd quarter 2017 (Million USD) – USD 1,232 Million , Similarly for Old Navy Global it is USD 1,757 Million , for Banana Republic Global it is  USD 579 Million . Out of total revenue of USD 3,799 Million , USA  has a share of over 80% on the whole and Europe has merely a share of 4% in net sales. Except GAP Global, no other brand has serious presence in Asia for the retailer. 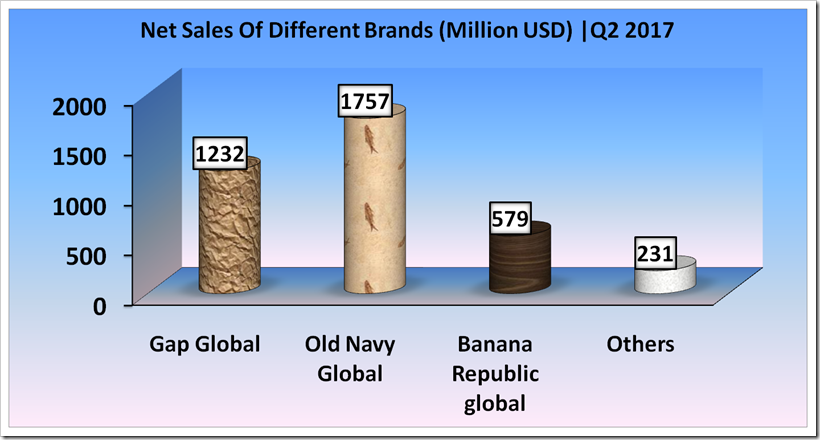 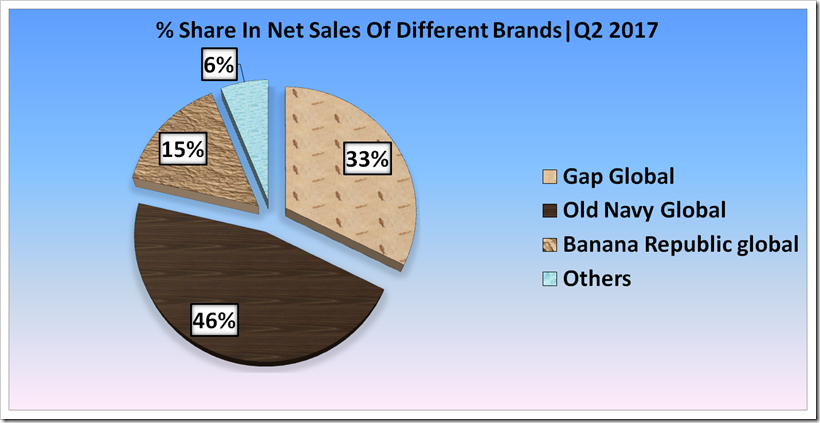 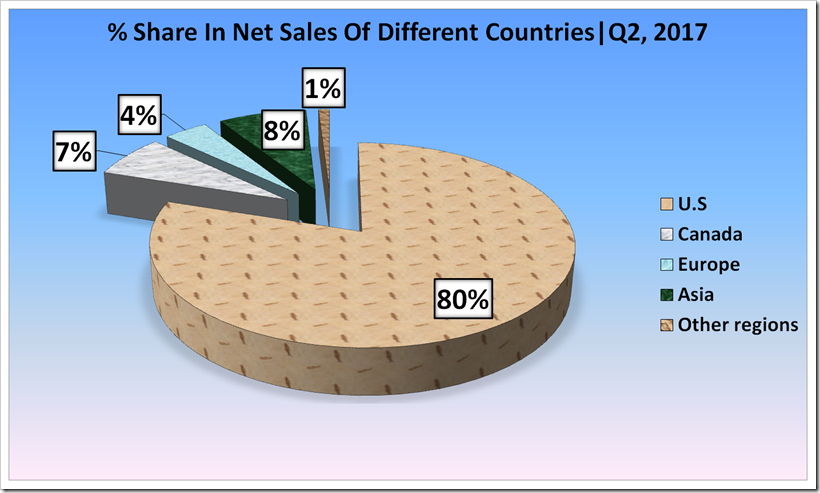 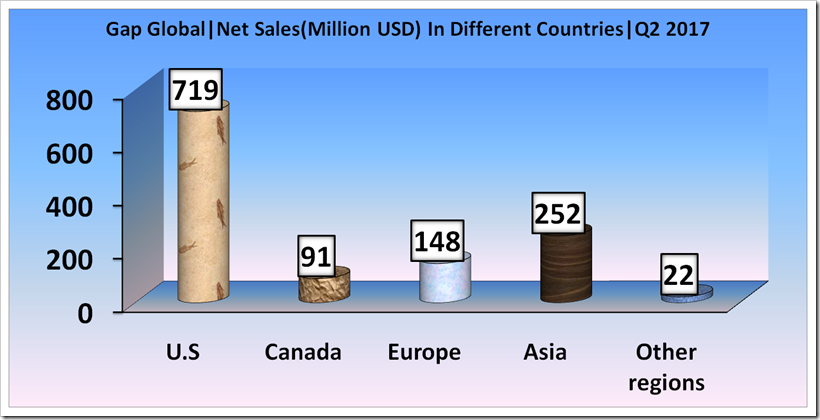 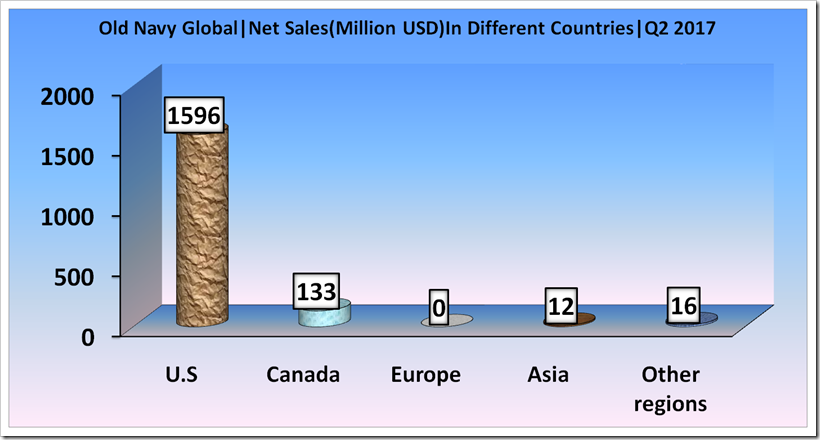 The graph shows the net sales (Million USD) in second quarter, 2017  in different countries for Banana Republic Global . U. S contributes the major portion of over 80% and balance is just some contribution from Canada and miniscule quantities in Asia. 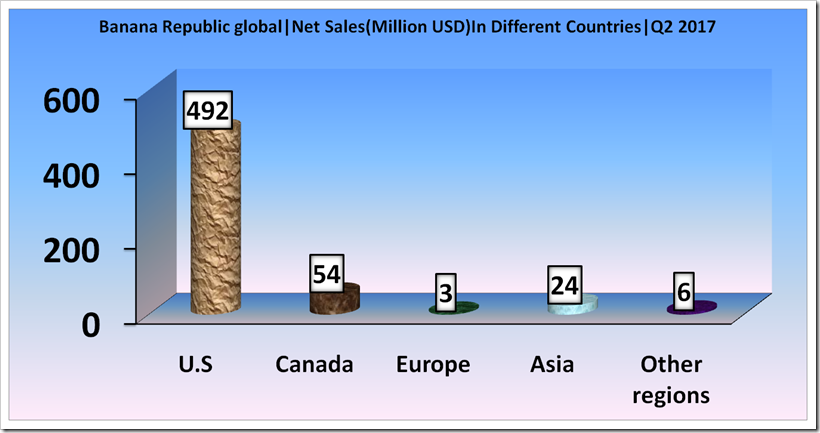 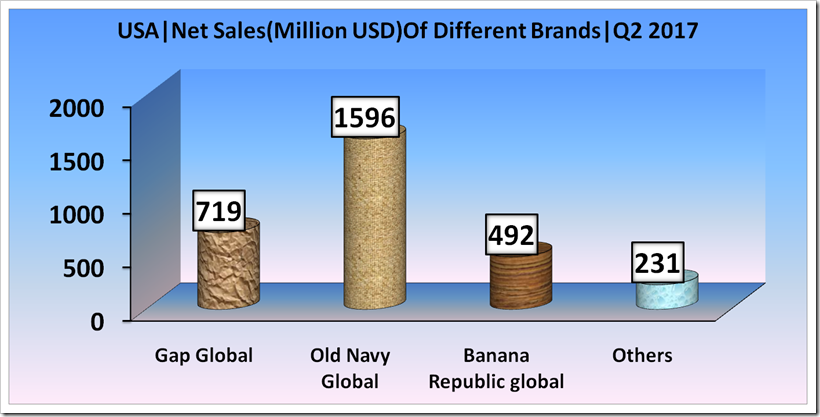 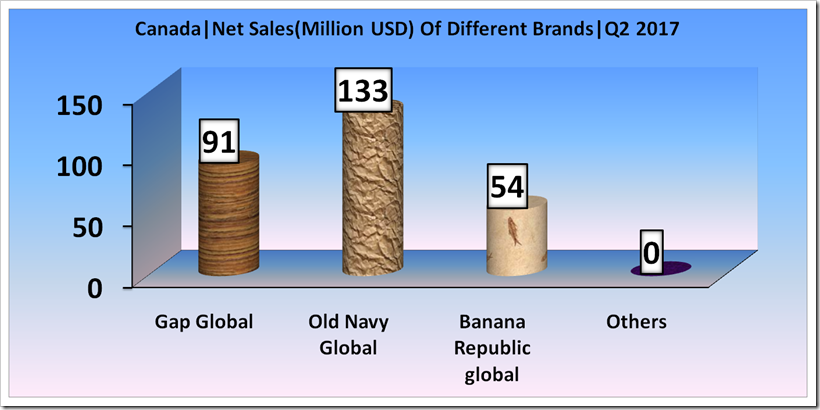 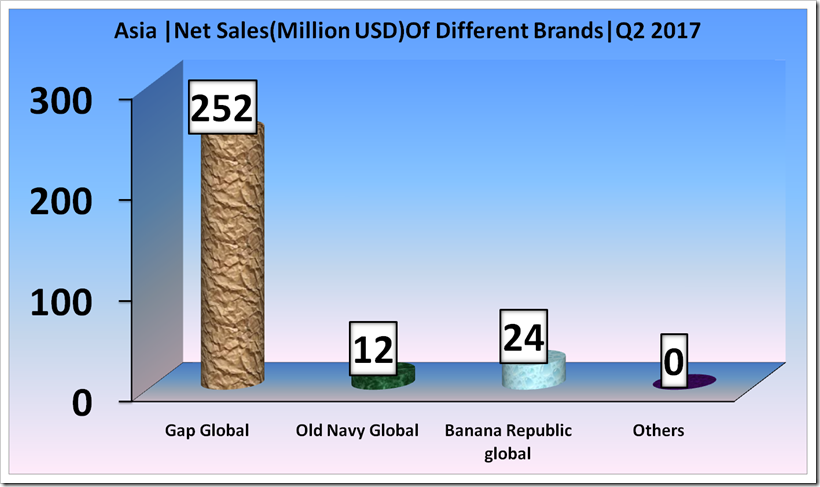 The comparative study gives many surprising statistics about the ups and downs of Gap revenue coverage over different regions. Sales in USA have growin by 3% however the Asia sales are down  2% and the reason could be the inability of the retailer to fight against retailers like H&M and Zara which are cutting  down their prices to take over the shares of their competitors. The equations have been changed over the years and for the retailers of  mid range denim , the market has become pretty difficult due to   change in consumer behavior . Recently , H&M achieved the sales of USD 120 million in India within 6 months of starting operations and that too with handful stores which is very encouraging however it sets the balls on rolling for such markets.  It seems that GAP is not currently geared up to  perform in any other market except the US and this is perhaps the reason for its almost static sales. The company will have to devise strategies to be present in a stronger way in these markets as most of the growth is happening in Asia and GAP is currently kind of lost in these markets.

Within a span of 13 weeks , the company has closed 22 of its stores worldwide however opened only 15 with a net reduction in number of stores .  Old Navy North America seems to be growing as they have 8 new stores while 4 stores which has been closed during this quarter . With a Total stores of 3186 in the beginning of Q2 ,17 , the company is left with 3179 stores at the end of the quarter which includes 22 closer and 15 new additions to fleet . 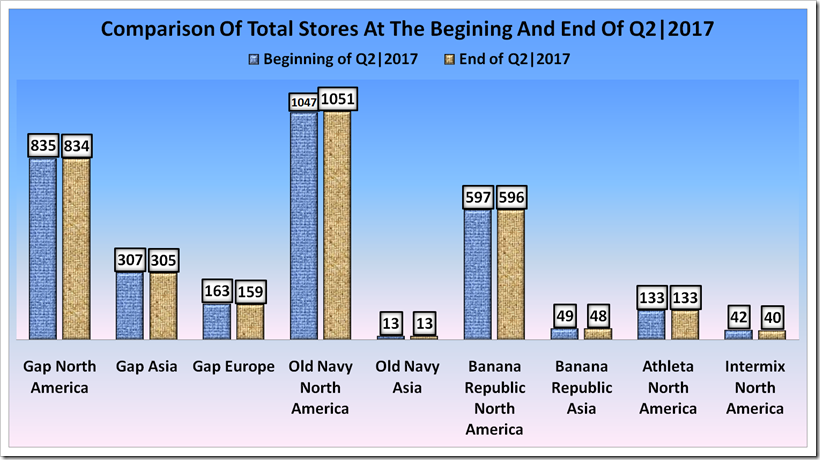 GAP and many such retailers in mid priced segments need to revamp their strategies to fight the onslaught of fast retailers and fast fashion. These retailers are losing the race with the more nimble footed ones who are giving cheaper products with reasonable quality. To survive, they need to innovate. Here it is also important to note the competition is not only from H&Ms and Zaras but also from Online retailers like Amazon who are turning new leaves in the chapter of fashion evolution with new technologies like Artificial Intelligence. The challenges are many and those who preempt them will survive and grow !