Production Of Denim Jeans In The EU

Here is a summary of the production of denim jeans in the EU for the period 2003-2007. This report has been compiled by the CBI . It is interesting to see that till 2007 , the production of jeans in Italy is still the largest in the EU and followed closely by Romania and Spain. Italy is increasingly becoming an expensive place to produce the jeans – however, the production of jeans is still quite high. This production has actually seen a significant fall in the last 2 years as per industry estimates and the production is moving to low cost countries like Romania, Spain, Portugal etc. Italy is slowly expected to become more of a design centre than a production center.
Even countries like Romania and Spain are now producing which are middle to high end. The low end jeans are almost entirely being imported from third world countries. This is only to be expected.

It is interesting to note that in case of Romania, the average value of the jeans produced in 2003 was Euro 2.5 only. However, just within 4 years , the average value has increased to Euro 10.63 . This shows that the country has quickly migrated from being a producer of lowest end jeans to that of higher quality jeans in a very short period. This is perhaps the case in most of the EU countries as the wage structure there does not allow to produce low cost jeans which can be easily sourced from the less developed countries. In case of Romania, it is specially so since a large number of Italian jeans manufacturers have set up base there and having their designing base in Italy, they produce in Romania.

When we come to the average value of the jeans produced in EU in 2003 as compared to that in 2007, we again arrive at the same conclusion. In 2003, the average value per pair of jeans was Euro 13.90  . The same increased to Euro 18.45.  This has perhaps increased further in the last 2 years.

It is also  interesting to note that almost 89% of total jeans manufacturing in EU is concentrated in Italy, Spain and Romania and out of which Italy and Spain can count as fairly developed countries. Though manufacturing in these countries will reduce in the coming years, it goes on to prove that low cost may not always be the reason for a region to develop a large manufacturing base. The supporting infrastructure, the systems, proximity to  market and the entire knowledge base is equally , if not more, important.  Similar  arguments could perhaps be used to justify the increase of jeans manufacturing in L.A in US.

Note : An unrelated but interesting comparison is the figure of production of jeans in the town of Xintang in China which is supposed to be close to 200 million pcs  per annum. Thus this single town in China produces more  than double the jeans produced in the entire EU  !!!! 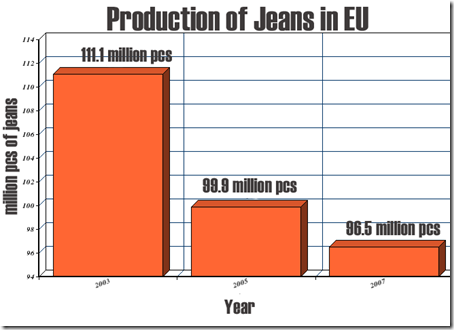 The complete report on Jeans can be downloaded for free from CBI website. CBI is the Centre for Promotion of Imports from Developing Countries.