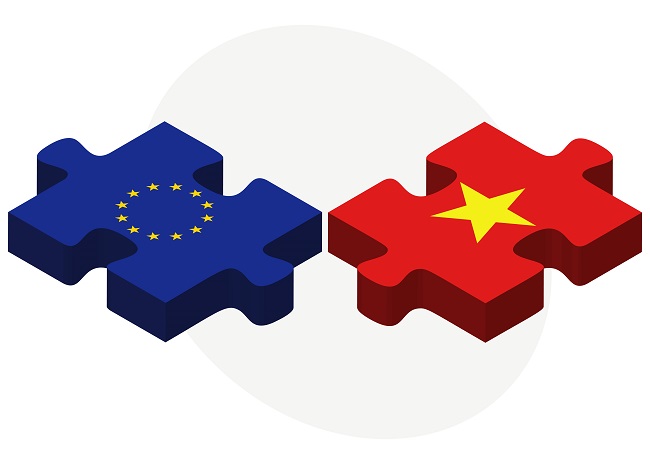 Vietnam has been in the news for last few years due its back to back bilateral trade agreements with many countries including Russia and Japan. The TPP and FTA debates were the most favorite ones and a lot has been written till date on the potential prosperity and fortune of Vietnam’s Economy keeping all these trade agreements in the center. After the exit of the USA from TPP , the discussions on TPP almost ceased as US was the major player in the TPP. However, FTA with EU seems round the corner.

Undoubtedly ,the trade is pacing up in the country by leaps and bounds , especially the apparel segment has been growing and even after the TPP fiasco , the country is performing very well in the US market.After having achieved about $31 billion in 2017, as per report, Vietnam   is targeting exports of US$34bn in 2018 as it looks to invest more in technology to increase productivity and shorten delivery times, and increase its focus on markets such as Australia and Russia.In the year 2017, Vietnam’s garment-textile exports to major markets like the US, the EU, Japan, the Republic of Korea and Russia increased by 7.2 percent, 9.23 percent, 6.1 percent, 11.8 percent and 56 percent, respectively.

Negotiations for an EU-Vietnam FTA were launched in June 2012.The EU considers the FTAs with individual ASEAN countries as stepping stones towards an agreement in the regional framework, which remains the ultimate goal and on 2nd December 2015, after nearly 3 years with 14 rounds of negotiations, the Minister of Industry and Trade of Vietnam, H.E. Vu Huy Hoang and the European Commissioner for Trade, H.E. Cecilia Malmström had signed the Vietnam-EU Free Trade Agreement (FTA). Both parties were to finally ratify the same and the FTA was to be effective from 1st January 2018.

Nearly all customs duties – over 99% of the tariffs will be eliminated. The small remaining number is mainly due to the transition period. Vietnam will liberalize 65% of import duties on EU exports to Vietnam at entry into force and the remaining duties will be eliminated due to the next ten years; EU duties will be eliminated over a seven year period. The market will be opened for most of EU food products, i.e. wine, spirits and frozen pork meat will be liberalized after seven years and dairy products after a maximum of five years. The EU will eliminate duties for some  products in the textile and footwear sector. The EU has offered access to Vietnamese exports via tariff rate quotas (TRQs), because some sensitive agricultural products will not be fully liberalized. Furthermore, the agreement will contain an annex with provisions to address non-tariff barriers in the automotive sector. Vietnamese exports of textile, clothing and footwear to the EU are expected to more than double in 2020 as a result of the FTA. The FTA will also help to increase quality of investment flows from EU, accelerate the process of sharing expertise and transfer of green technology and the creation of more employment activities.

Vietnamese Exports Certain products that are sensitive for EU producers, particularly in the textile apparel and footwear sectors, will have longer liberalisation periods of up to 7 years. A specific example of this are leather shoes, which will have a long liberalisation period of 7 years, while less sensitive products such as synthetic shoes, will be fully liberalised from day one..

The impact of the FTA is expected to be significant, considerably increasing trade flows between Vietnam and the EU in various areas. Vietnam’s exports of textile, clothing and footwear to the EU are expected to more than double in 2020 as a result of the EVFTA, according to law firm Duane Morris. It will not only be Vietnam and the EU that benefit from the boost to trade. “Vietnam is a production base for Korean businesses exporting globally, so Vietnam’s efforts to develop FTAs are very important for Korean companies, and they have a lot of interest in the EU deal,” Hwang Soon Sung, counselor at the Korean Embassy in Hanoi, told OBG.

The FTA also includes better market access for EU investors, and strengthens regulations on intellectual property. EU firms will be able to bid for many public contracts and will gain improved access to sectors like banking, insurance and maritime transport. Industries such as food production and construction materials will also be opened up to greater EU investment.The text of the FTA reflects the ambition shown by Vietnam during the negotiation process. Implementation of its provisions will help Vietnam to enhance the quality of its economic governance in line with the sustainable development commitments embedded in the FTA. By enabling a more business-friendly environment, this will have positive impacts not only in terms of increasing market access opportunities to the EU, but also for its own domestic industry.

“The EU remains fully committed to invest in the development of the country, as our strategic partnership goes beyond trade issues and development cooperation,” Bruno Angelet, the EU’s ambassador to Vietnam, told OBG. “Vietnam is a now a benchmark for the other ASEAN countries that are willing to engage in FTA negotiations with the EU.”

When EVFTA will be implemented, it would become one of the most ambitious and comprehensive investment agreements that have been signed between the European Union (EU) and a developing country. After the agreement is put into effect, Vietnamese enterprises can get access to a potential market with the population of more than 500 million people and the total Gross Domestic Product (GDP) of US$15,000 billion which accounts for 22 per cent of global GDP. By contrast, investors coming from EU can enjoy a market that has the most rapid economic growth in the region with the population of more than 90 million people. Economic experts said that once it will be approved from the parliament and implemented, it will contribute about 2.5 per cent to Vietnam’s GDP in 2020 and 4.6 per cent in 2025.

Gellert Horvath, Co-chairman of the European Chamber of Commerce in Vietnam (EuroCham) said that EU and Vietnam are striving to promote the preparation of EVFTA, hoping to sign the agreement in the mid of 2018.

The FTA was supposed to be implemented in January itself but there has been some delay and the EU officials feel that by Mid 2018, the agreement would be effective . Thus its looking like July 1st might be the effective date of implementation of the agreement.

Vietnam is understood to have earned US$31 billion from exports of textile and garment this year, a ten per cent increase compared to last year. A report of The Vietnam Textile and Apparel Association (VITAS) shows that in 2017, Vietnam’s exports of garment products to the US reached US$12.53 billion, 9.4 per cent higher than 2016; the figures for EU and Japan are estimated at US$3.7 billion and US$3.05 billion respectively.

According to Le Tien Truong, General Director of Vietnam National Textile and Garment Group, the textile and garment export turnover this year has increased by 40 times compared with a decade ago when Vietnam joined the World Trade Organization (WTO). He stressed that this growth was particularly impressive considering that imports fell 0.85 per cent.

Viet Nam has also boosted its exports to China with new products such as yarns and fibers and reached a turnover of US$3.2 billion which is equal to the figure for Japan, the third largest export market of Vietnam for more than 20 years. In addition, the Eurasian economic union (EAEU) has also marked the return of Vietnamese textile and garment to the markets in the former Soviet Union. In the years 2016-2017, exports to Russia grew at a rate of 56 per cent and now have reached approximately US$200 million. FTA with Russia is helping push the figures.

“Russia is a major potential market for Vietnamese textile and apparel exports, as Russia’s total imports reached US$9.8 billion, but Vietnam has only a 1.8% market share currently,” said Truong.

Since the Vietnam Textile and Garment Association and the Vietnam Textile and Garment Group have been deeply involved in the negotiation process of most of FTAs, they have been enabled to update the information promptly and therefore, proactively recommend options for the negotiating delegation to take advantage of the textile and garment industry. In order to promote the advantages of FTAs, Truong suggested that the government, ministries, and departments should promote new economic cooperation, especially the Comprehensive and Progressive Agreement for Trans-Pacific Partnership (CPTPP) and the EU-Vietnam Free Trade Agreement.

Is TPP Dead Or Is There Still Something Cooking ?

After the exit of USA from the much talked TPP with Vietnam , the remaining 11 members of the TPP, Australia, Brunei, Canada, Chile, Japan, Malaysia, Mexico, New Zealand, Peru, Singapore and Vietnam, made significant progress towards sealing a deal in Da Nang in November’17. It’s thought that the new deal, rebranded as the Comprehensive and Progressive Agreement for Trans-Pacific Partnership (CPTPP), might be signed as early as March. Once it has been ratified by member parliaments, it may be expanded.

The US saw the TPP as a way of containing China’s influence in Asia Pacific. But in its absence, China may join further down the line, as well as the likes of South Korea and Indonesia. Currently, TPP chapters on state-owned enterprises, along with those on intellectual property and competition, would be difficult for China to meet.However, recently there has been interest by UK to join this group.

“While the UK has strong incentives to want in to the TPP, it is less clear why the Pacific countries would want to expand the deal to the Atlantic and the UK. The UK market is not insignificant, of course. Getting additional members into the TPP helps the existing countries by increasing the size of the overall market included in the agreement,” writes Deborah Elms, CEO of the Asian Trade Centre in Singapore, in a recent blog post.

Countries such as Vietnam would welcome access to the UK garment and footwear market, for instance, which, while smaller than the US, is still sizeable.

“In fact, we have UK investor clients who have already invested in capital equipment in Vietnam to produce garment exports for the UK market. They and their Vietnamese partners had expected the EU-Vietnam FTA to enter into effect sooner, so they are still struggling with high EU duty rates. The TPP might just save their shirts, so to speak,” says Burke of Baker McKenzie.

As it stands, the idea is far from reality. Opposition figures in the UK have criticised the government for disengaging from more pressing issues closer to home. However, once the UK exits the EU the pressure to seal substantial agreements around the world will be huge. If the UK joins the TPP, the game will be more interesting for Vietnam and other stakeholders.

To date, Viet Nam has passed 10 bilateral and multilateral trade agreements, including ASEAN Free Trade Area, five ASEAN+1 FTAs, and FTAs with Japan, South Korea, Chile , Russia and the Eurasia Economic Union.
Viet Nam has also concluded FTA negotiations with the EU and was negotiating Regional Comprehensive Economic Partnership (RCEP) and Comprehensive and Progressive Agreement for Trans-Pacific Partnership (CPTPP).About 60 countries had already negotiated or were negotiating FTAs with Viet Nam, which accounts for 90 per cent of Viet Nam’s trade

FTAs have played a vital role in the development of not only Vietnam but also other countries in the world. Free Trade Agreements have proven to be a key driver of economic reform and the most effective instruments to boost trade and investment. Experience has shown that each time an FTA is ratified and implemented, it has a rapid and significant impact on the participating countries’ economies, largely because it secures trade/services and long-term investment which are the top priorities for sustained and successful business development. That is why Vietnam, since the start of the open door policy, has followed a consistent and effective strategy of developing FTAs with its major trade partners and its FTA with EU will turn out  to be its largest agreement affecting its economy.

Disclaimer : The data and information have been taken from the various local and international newspapers and government websites and compiled here.