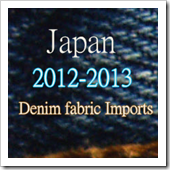 Japan is the most important region for denim production , when we speak of niche , premium and selvedge denim fabrics.  While Japanese producers love their own denim and most of the jeans produced in Japan is made from their own denim. However, there is some quantity that is being imported from different countries.

In this report we shall look at the imports of denim fabrics from various destinations around the world in Jan-July 2013 vs same period in 2012. We had previously covered the exports from Japan in another report. This report will cover: