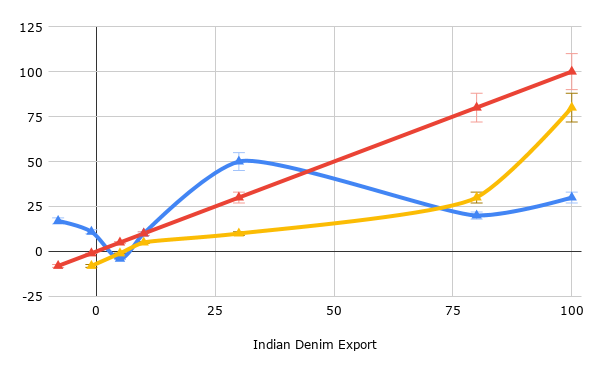 Covid 19 has had a major impact on various industries globally and textile / apparel is one of the worst hit . Denim being a part of this industry is even more hit with most large retailers around the world shutting doors on their stores . India exports a lot of denim fabrics and in this report we analyse how the impact of Covid19 can be seen on the exports.
We are covering the denim export from India in March 2020 and later in the report, we compare it with the export of March 2019 to understand the impact of COVID 19 on Indian Denim Industry.

The analysis will be in three parts

There are 12 major countries where India exported approx 90% out of its total exports. The list primarily included Bangladesh, Egypt, Colombia, and Sri Lanka. Total export from India stood at 14.75 million meters at an average price of $2.15/meter.

In March’20, a major portion of denim was exported to Bangladesh which was approx. 45% and the total export figure stood at 6.63 million meters and it was exported at an average price at $2.36/m. The 2nd major country where exports were made was Colombia which had a 15% share in the total export in the same month.

Compared to the export in March’19, the export in March’20 fell by 31.20% and the reason is pressure on demand globally due to the COVID19 pandemic. Since the stores are closed and all the fresh buying orders are on hold, and hence the raw material’s demand took a toll.

So far as the exporters are concerned, Arvind’s export plunged by over 36% which brought down the volume from 4.44 million meters to 2.83 million meters. The average price also discounted more than 8% and fell unto the level of $2.63/m