But all the previous lows have been proved to be quite ‘High’ compared to this new Bikini Jeans that has come from a Japanese Brazilian company – Sanna Brazil Fashion. The bikini seems to have been merged with the jeans to create a new ultra low and exposing jeans. The bikini strings hold the jeans on to its place which would otherwise just fall off ! 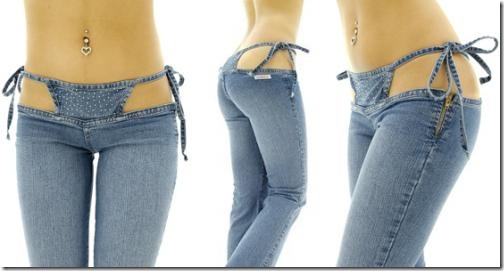 Special Collection By G Star On Its 30th Anniversary

Most men would not be complaining on women wearing these jeans though some women would.

However, on a serious note , the jeans is meant for highly perfect bodies and will be difficult to carry off by most women. The occasions to put on such a dress would probably be limited and it is probably a fad which will not carry far.. But the fact that me and probably many others like me are writing about these jeans have created a visual sensation at least.. And if you (women only!) are bold enough to try these, visit the site of the company to buy online.