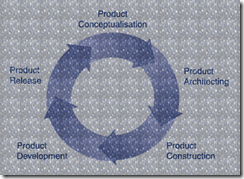 Product development is especially important in the denim market because of demands for novelty and performance, both on the fabric production side and from the garment processing side.

There are 2 aspects to product development of fabrics. Product development is usually thought of as creating a product for the market with significantly different colors, appearances (flat, slubs), hands (soft, raspy) or performance (stretch, permanent press).

The leading denim companies in the U.S. conducted extensive research into solving the mysteries of denim production, especially in dyeing and finishing, Outside the U.S., there are some denim companies in countries like Italy, Turkey and Japan that are well-known for their quality.

The leader in denim quality, Burlington, developed a reputation for quality such that active marketing was not necessary in some years. In fact, their denim was in such high demand because of its quality, that Burlington could not produce enough and resorted to rationing their fabric to their best customers. Of course, the prices that they received were much better simply because they could deliver the highest quality consistently.

While most of the denim factories in the U.S. were closed by the late 1990’s, there are still 4 operations remaining, no large establishments are left, only 2 small and 2 medium operations.

The 2 small operations (Cone and Denim North America) are dedicated to high-fashion denim, while the 2 medium-sized companies rely primarily on producing large quantities of a few basic styles, but with high levels of quality.

One of the medium-sized operations, Mount Vernon, also produces significant quantities of non-denim fabrics which provides financial stability and flexibility in textile markets. The other, American Cotton Growers, also produces a line of fashion denims that are in strong demand.

Producing the highest-level quality denims may be the surest route to long-term success. The higher-fashion market is unpredictable and makes sudden changes that has had the effect of a financial earthquake on denim producers that struggle with specialty denim. Mixing basic and specialty denim in the same production operation can complicate manufacturing to the point where effective control is lost.

The product development function can also be a financial liability, if it lacks FOCUS and DISCIPLINE. The FOCUS of product development must be company profits; to maintain that focus, marketing managers must exercise DISCIPLINE by not trying to provide every fabric requested by customers.

NOT MUCH REALLY NEW

The remarkable appeal of this “antique” denim is probably because it has a home-made or hand-woven character. The shuttle loom is the closest automatic weaving machine to handloom weaving with its large shed opening and low tensions.

For denim executives that are struggling in the current market with its increasing demands for lower prices, organizing an effort utilizing hand-loom weaving could offer a new source of revenue. There are millions of hand-loom weavers all over the world and denim operations, especially those with sheet Indigo machines, produce large quantities of waste yarn, as a result of dye machine stops or slow speeds and is not suitable for automatic weaving and( that is already dyed and sized, ready for weaving.

In this way, yarn waste could be used for a very high value-added product, which would also employ many people in developing countries and also contribute to “sustainability”.