Bluconnection – an innovative indigo dye manufacturing company from Singapore has compiled a comprehensive compendium about the history , chemistry and application of Indigo dyes. We are producing some extracts from this compendium . Also show is the complete presentation in a slideshow under the article and it can also be obtained in  PDF form Free by email from Paul Cowell of Bluconnection.

The roots of indigo go back into the stone age when our ancestors used indigo in cave art and for painting their bodies. for at least 6,000 years indigo has been used as a dye, for example the colouration of textiles. the oldest evidence for this was found during excavations in the indus valley between bricks forming a small vat in the ground. it is suggested that this is why we call it indigo, a greek word meaning “coming from India.”
There are many plants containing the precursor of indigo, before indigo was
synthesized, it was extracted from these plants – in the beginning probably just by chewing them. historically, indigo maintained it’s place since it was the only blue dye available and still today, after more than 150 years of organic chemistry and quite a few competitive dyes of blue colour, it is still the most efficient blue dye or pigment. in fact there is no other substance that creates such intensive blue colour with such few carbon atoms in its molecule.
In the high and late middle ages – about 500 to 1000 years ago – the most
important dye for black, blue and brown shades was gained from a plant called “dyer’s woad” (isatis tinctoria). woad was grown in England and Germany and the areas and towns involved in growing and trading woad became extremely wealthy. many rules and regulations gave privileges to those communities in order to maximize and maintain their earnings from woad.
This dye was not called indigo. Indigo only came to Europe later during the modern age. Although today we know that both dyes had the same chemical  structure. In the course of increasing overseas trade, colonialism and slavery, indigo was produced on large plantations in subtropical regions, e.g. in India and along America’s Atlantic coast. this indigo was extracted from a plant named “indigo fera tinctoria”. It was purer and gave a more brilliant shade. despite the ongoing privileges protecting the woad industry, this indigo gained more and more market
share. in Nurenberg it was written that even the death penalty was imposed on those found guilty of having used indigo. nevertheless, woad had nearly disappeared by the second half of the 19th century. by that time the global annual consumption of natural indigo had reached 5,000 metric tons.
Indigo had largely contributed to the wealth of the companies and patrician
families involved in overseas trading. due to this, the pioneers of organic chemistry were challenged to find a way to synthesize indigo. In 1883 Adolf von Baeyer, a German professor and winner of the 1905 nobel prize in chemistry, discovered the chemical structure of indigo. based on this work, synthetic indigo production was developed at Badische Anilin & Soda Fabric (BASF) and started in an industrial scale. within only a few years synthetic indigo almost completely replaced the natural indigo imported from overseas. 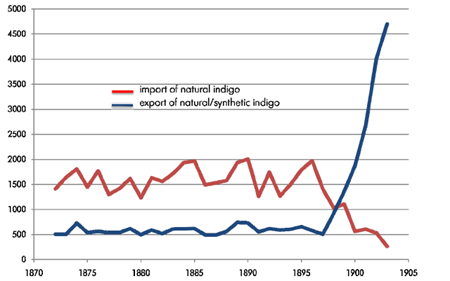 imports and exports of indigo in the German Empire

The production and sales of synthetic indigo followed the graph of a typical
product cycle. It grew during the first years and declined later because the
chemists had developed other dyes with better yield and superior fastness
properties. having understood chemically the principle way of applying indigo, reduction to a dye and oxidation to a pigment on the fiber, a number of other vat dyes were synthesized. however, indigo never has been defeated and after decades as a niche product it came back as the dye for denim in the late 50’s of the last century.
Production of synthetic indigo had it’s revival during the second half of the last century and indigo has become the most important textile dye.

In the 50s BASF was prepared quite well for this hype. Nevertheless BASF’s indigo capacity could not meet the huge global indigo demand during the 60s and 70s. The increasing prices encouraged quite a few competitors to invest in indigo production, particularly in China. it is said that in Hong Kong an indigo drum could be sold for a lot of money. Former sales managers tell about customers who issued blank cheques hoping to get hold of some extra kilograms of indigo.Huge indigo production capacities had been built up in China by the middle of the 90s. with a total capacity around 100,000 tons for a global indigo market of ~30,000 tons. Today we estimate a global indigo market consumption of ~60,000 tons. Due to excess capacity for synthetic indigo this market became an oligopoly during the 1990s. lower and lower prices made the smaller producers disappear.
Indigo by nature has a number of unique features making it successful: