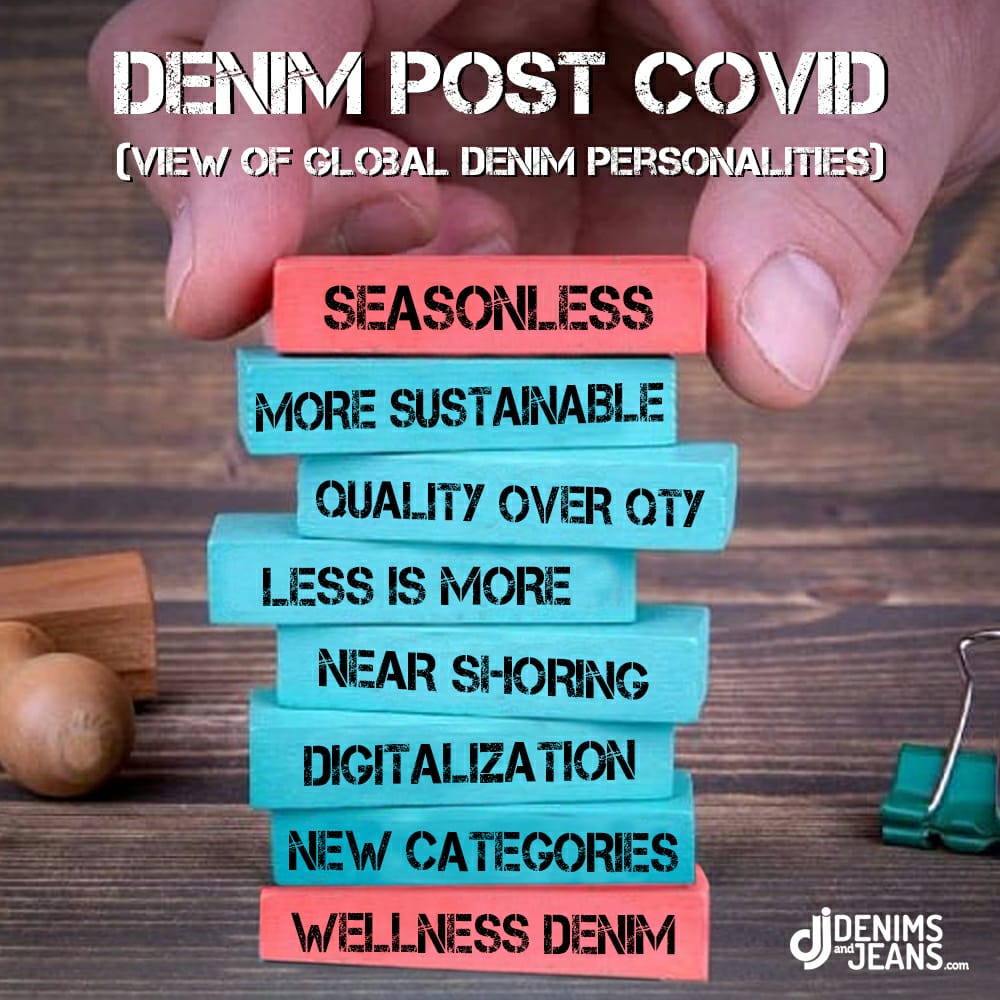 During the #Covidtimes Live talks at our Instagram , the guests shared some valuable insights into the current situation and its effects . We share herewith , the second part of our summarized comments , from some of the guests . The first part was already published some time back and you can read it here

There has been a lot of press about retail partners not standing up to their obligations but I think most retail partners have been very supportive, very understanding also of the situation and most of them have been very ethical. We should give some credit over there as well because there has been a lot of negative press about brands even though most of them have tried their best in this very difficult situation….

…I think initially a lot of brands and a lot of business leaders panicked and of course that’s fine. That’s the whole idea of crisis management that you manage the crisis every day as it comes. Initial reactions were tough but then sanity prevailed and we all worked it out.

Sustainability is something that has gained attraction over so many years because it is something which has been sort of driven by the consumers. consumers are sort of wanting sustainability, they want to move towards a good green  planet and that’s why it is a need which is being translated to the brands who in turn  are pushing the supply chain.

….And if you really see this whole push  on sustainability has done good work. For example, this whole thing about zero liquid discharge of hazardous chemicals and the denim industry used to have this whole thing about sandblasting which was really bad for health and then it was this whole movement of public opinion against and finally sandblasting was banned. Similarly this whole conversation against  using PP spray is getting strong . So sustainability is something which is a big need for consumers and that’s why it will continue to be important . We have seen there are some people who really push the pedal on that. There are  some people who have been absolutely not compromising on that and so I think it’s a part of the DNA of organizations .

Consumers will be more conscious about the product and how it’s made .  I don’t think they will be differentiating between one polyester fiber or the other, again I’m just using that as an example, no offense to the polyester suppliers . But they do not differentiate because this again there’s so much complexity in the business of sustainability that some of them don’t understand. So I don’t think the consumer will understand the difference. What they will understand are absolutes when it comes to sustainability.

….Other than that,  region to region,  I’m not sure how consumer behavior will change, depends on how much disposable income different consumers have in different areas in the world….

….So we don’t know much about that but what we do know is that if you at least look at the younger generations . Gen Z and Gen Alpha even pre-pandemic were more inclined towards experiences than products – it’s a very good time for brands and retailers to start re-thinking the consumer experience. For example, Amazon did their Go stores, you will see more eCommerce companies add brick-and-mortar and you will see them do it right …

We’ll probably have 40-50% reduction in consumption or production of denim in future. I can not predict the exact reduction but I have discussed it with my father also, so I guess there will be a 40-50% drop in consumption/production in near future, not in the long term but in the coming months.

Many companies may not be able to continue its business and personally I believe that until winter 2021, the situation will be complex in Italy and in the entire Europe. Imagine that the stories which are closed now and maybe they will open in middle of may or june but practically for them summer season would be gone at that time.

The summer collection of 2020 is in the stores now which they will repurpose in next summer, so there will be a contraction in the production next year also for sure. As a consequence of course, the chemical and dyes production also suffer as far as the production and consumption are concerned.

So I think we have to rethink our business model in the coming months. It would be a big challenge for all of us and to remain in the market , a lot of money needs to be invested in new technology and innovation. I think these are the only ways to address the challenge and I think by 2022 we would have new opportunities, and these 18 months would be really challenging.

A lot of development has already been happening in the denim industry through technology, technological advancements and we have seen, I was one of the first ones to introduce the idea of functional technological denim fabrics into the industry. I had that great hook for that and this we’re talking like 10-15 years ago and in the meantime not so much really happened in that category because there’s a certain limitation as to how the fabrics are manufactured, designed for purpose and then we have seen many fiber ,new fiber, raw material integration into the industry….

..Again limited but they did and you know again good ideas like blood circulation, face changing materials, Coolmax , a lot of ideas. I think we need to look at pollution reactive area right now. So that’s an area which is really growing and I think fashion could play a big role there ….

That’s one area but again it’s really early stages as to where the product will evolve but definitely speaking of denim, we have to bring back its value, its authenticity but again as a system not as a product but as a system. And of course we have to look at the digital product as well, how we can devise the manufacturing.

…I think that after every rain shower the Sun will show and today the Sun will set but it will surely rise tomorrow and that this pause is one that we usually don’t ever have an opportunity for . So it’s really a chance of a lifetime to sit with yourself – to ask yourself who and what you are and what your intentionality will be and once you reassess and take that long look again if we’re in the corner…

..I think it’s human nature to come out fighting and I think this is a fight – so I choose to stand and fight and I believe that there’s a brighter future ahead. I believe this is a great opportunity for starting new brands and breathing life into older brands and certainly opportunity for younger workers to step up and take leadership roles .And maintain an open mind and continue to evolve ourselves and learn . I would say that innovation and technology will lead the way as it has in other business sectors and I think for the context you got to be accountable and we want our legacy to be one of benevolence …

..Currently, the process is slow as I do it digitally, I’m talking to them on every process. I need to see photographs of each stage which takes time and a lot of patience as well some of the guys get so mad with me because I want to see high- resolution photographs just to see if there are highs or lows are different or is it correct…

..I’m basically watching individual sign-offs that create the product. We also need to handle sign off in Hong Kong for the majority of our stuff for the German market. German shops are closed, and all the teams in Germany are working from home. I have to be kind of babysitting the whole process and work with our technical team. We have to evaluate and process for each garment to go forward into production. We kind of need to believe in our team that it’ll be okay in the future because we’re not even sure if it’s accepted once it all starts up…

..We’re trying to keep it as a high standard as possible; nothing is missed before we go forward on a style. Our customers are still asking for the products, and they are not asking to hold back or stop it. So we still have our supply chain, we have actually quite a lot of okay smaller orders going forward..

..We don’t just do denim here; we also do knit. We’ve actually been able to handle slowing down cut dates or reducing units that are already in work. We still need to have a reduction or percentage overall. If it’s late though into the market for knits they cancel but knit categories were down 30-35 % of the production, which is so sad but we can’t stop it either…

Future of Denim Sourcing is here