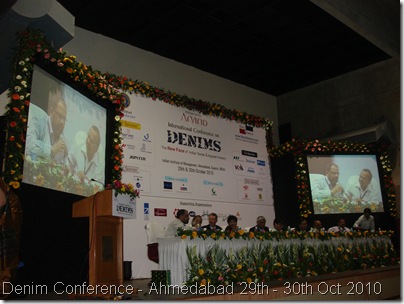 The ‘International Denim Conference’ was held at Ahmedabad on 29th and 30th October and was a big success having been attended by over 500 delegates including the who’s who of the Denim Industry in India. CEOs  and Top executives of various denim companies were present at the conference and most of them gave their views on the various aspects of the Indian and world denim industry .

Organized by Fibre2fashion.com and the Textile Association of India , the conference brought out some very interestings revelations and informations about the denim industry . Dr P R Roy – the father of Indian Denim Industry in India – and Managing Director at Fibre2fashion.com was instrumental in bringing up this conference. Some of the important  points related to the conference are summarized below :

Comments on History of Denim

Dr Roy informed that Indigo was cultivated and grown in India over 5000 years ago and it was used to dye cotton and wool . However, it did not see much commercialization in India till late eighties.  Denim industry was born in India in 1980s from the need to compete with the decentralized sector  and gave rise to the ‘Blue Ocean’ strategy – meaning moving to the denim sector to avoid the competition from decentralized sector. From just over 35 million mtrs produced in India in 1987 , we now have over 650 million mtrs of denim production produced by about 24 mills.
He also presented the unique products – Indigo Wool and Indigo Silk – from the stable of reputed denim company – Malwa Industries.

Some Statistics on the World Denim Demand and Supply

Keynote address was presented by Robin Anson of ‘ Textiles Intelligence’. He made an excellent presentation on how the denim is being demanded , produced , exported and imported in the last few years. The biggest denim fabric exporter without question is China which shipped fabric valued at around $920 million in 2009 to seize a global market share of 24.5 percent. The second slot was surprisingly held by Hong Kong (a large part of it probably  represents intra China – HK trade) with around $860 million and a share of 18.8 percent, Turkey with $325 million and 8.6 percent, Italy $300 million and 8.0 percent, Pakistan around $225 million and 6.6 percent, India around $180 million and 4.2 percent, followed by Japan, Spain and Brazil.
Denim fabric imports by the US and the 27-member European Union have been plunging since 2005. From around $150 million in 2005, US imports have sky-dived to just round $75 million in 2009 and those of EU have sunk from €255 million to €150 in the same period.
In the case of men’s jeans, the US imported around 110 million pieces from Mexico in the period Sept 2009 to Aug 2010. China and Bangladesh followed Mexico with exports totaling to around 70 million pairs, each. India stands at 14th place with exports amounting to around 1.5 million pieces in the same period and is preceded by countries like Nicaragua, Lesotho and Guatemala in jeans exports to the US. He mentioned that China was not a big threat in the denim industry since rising costs of labor and probable appreciation of Yuan would reduce the competitiveness of the Chinese fabrics.
A very interesting point made out by him was that China is considering connecting its backward and remote regions by high speed trains to the western Europe . If this happens over a period of next few years, it would revolutionize apparel sourcing in Europe as goods would reach from China in less than a day !!
The global production of denim fabrics stands at about 5.5 billion mtrs currently.

A number of speakers gave details about the current situation of denim industry and its future prospects. Mr Rajiv Dayal , MD at Mafatlal Denims , mentioned that the value of denim fabric produced in India was:
In 2005  : Rs 46 billion (about USD 1.00 billion at  exchange rate of Rs 45/dollar) . Out of this about 70% was for domestic market.
In 2010 : Rs 78 billion (about USD 1.73 billion ) out of which again about 70% would be for domestic market. (average price about Rs 120 per mtr or about $2.67 )
In 2020 (projected) : Rs 220 billion (about USD 4.9 billion) and domestic market would again have a share of about 70%.  Total estimated production – 1.2 billion mtrs .
Global denim markets have grown at about 2 – 5% over last few decades and current global fabric production of 5 billion mtrs is valued at about $13 billion (an average price of $2.60 / mtr).
Indian Denim markets have grown at a CAGR of about 10-12 % in the last decade . The main drivers for this growth are the demographics – a population of about 50% between 15-35 years.  The domestic apparel market in India (all apparels) is estimated at about $36 billion currently and will increase to about $61 billion in 2015 and $100 billion in 2020.
US and EU market : –1% to 5% growth expected and averaging around 3%.

An interesting presentation was made by Mr Mahesh of Arvind Ltd regarding the status of organic denim – demand and supply.  According to him , cotton is produced in over 65 countries and consumes over 16% of world’s insecticides – more than any other crop.  India produced over 29.5 million bales (170kg) of cotton in 2009-10  and used over 54% of all pesticides in India despite using only 5% of land.
To counter the use of such high volumes of pesticides, Organic cotton is an alternative. The current demand for Organic cotton stands between $3-$4 billion and it outstrips supply.
Consumer interest in ‘Green’ products has enabled retailers like Wal-Mart, M & S , Woolworth , C & A and Carrefour to focus on and expand the sales of Organic cotton products.  C &A (Belgium) , Nike (US)  and Wal-Mart (US) are  the three top consumers of organic cotton worldwide.
Organic cotton grown worldwide represents just 0.76% of world cotton production. This is likely to slowly increase as large increases are not possible immediately in Organic cotton.
Organic Cotton Denim : Arvind has been focusing on organic cotton – producing 1 million mtrs in 2007 and currently manufacturing 8 million mtrs . Wal-Mart, Patagonia, H&M, C&A, Timberland, etc are the major supporters of Arvind’s organic denim initiative.

A very interesting presentation was made by Enrique Silla – Chairman of the Jeanologia group  of Spain. He explained how water consumption can be Significantly reduced using the G2 Machines which use ozone to do the washing. This technology has a great potential for reducing the environmental impact of denim manufacturing as almost 42 litres of water are used for making one jeans. Stressing on the urgency of reducing the usage of water in jeans manufacturing, Levi’s has recently announced that it would introduce about 1.5 million pairs of jeans using 28% to 96% less water.
Another technology that Enrique Silla talked about was using laser  machines to get the scraping and other finishing effects on jeans. This reduces the adverse impact on humans during the finishing process . In view of the recent ban on Sandblasting by Levi’s and H & M , such technologies have a bright future.

Impact Of Cotton Prices On Denim

Most of the industry stalwarts expressed great concern at the rising prices of cotton  which have almost doubled in the last one year. The prices are on a 15 year high and with no sign of reducing. This has affected the margins of most denim mills and they have been frantically trying to pass this on to consumers. Mr S.K. Gupta – Director at Raymonds UCO denim raised this question in the panel discussion and this was taken up as a serious issue . Mr Sudhir Mukherjee of Arvind felt that the prices would see a correction in the near future and Mr Deepak Chiripal (CEO Chiripal denim ) felt that there was no need to panic and impose taxes on yarn exports from India . Robin Ansen of Textiles Intelligence mentioned that the final impact of increased cotton prices would be less than 5% on retail level and hence it should not be unduly worried about . Some retailers have already increased their prices by as much as 8% .  However, worries were clearly visible on the faces of denim professionals  with margins under sever pressure !!

On Competition and Threat From Pakistan Denim Exports

Pakistan has been ramping up its exports of denim and is currently a very strong player in the denim market. The panelists felt that the currency advantage of Pakistan played a great role in increasing their competitiveness. The latest provision of Duty advantages to Pakistan by the EU to the tune of Euro 200 million was also discussed by the panel . This would greatly benefit the denim industry of Pakistan and was  a source of increased competition for Indian industry. The panelists felt that Indian denim industry should make a joint presentation to the Govt. to take up the matter with the EU so that the industry does not suffer due to the advantages given to exports from Pakistan.

Denim Trends and Sales in US

There were a number of other interesting presentations including those by Darshan Mehta – CEO of Reliance Brands on the advantages of being ‘ Stupid – referring to an ad campaign by Diesel’. As a consequence of this presentation, “STUPID” became a ‘Respectable Word’  and on a lighter note, panelists referred to some industry stalwarts as ‘Stupid’ inviting laughters from the audience.  !!!!. This presentation considerably lightened the atmosphere at the conference. Another one by Chakor Jain of VF Corp – gave insights into the growth possibilities in Tier 2 and 3 cities in India with the young people demanding branded products. This augurs well for the growth of the sales of ‘Branded Jeans’ in India .

There were still some more presentations including those  related to Denim processing and finishing but due to limited time and space, I will take them up at a later time. On the whole, the conference was very good, the atmosphere was charged and (not to forget ) the food was superb !