US Imports of Denim Apparel Recovers a Little

The US Imports of denim apparel , which was showing a decline of over 10% till May this year  compared to 2011, seem to have recovered a little . The latest figures show that the US imports of denim apparel for the period Jan- Sept. 2012 is down only by 5.8% as compared to similar period in 2011.
Though the imports are still lower than that in 2011, the reduced difference reflects a positive sentiment and an indication of better times to come in 2013.  On the ground too, the retailers are reflecting optimism and their orders too have firmed up  . On the whole, we can look forward to a better year ahead.

However, there is one downside. The average price of denim apparel, which had , till mid of this year ,  been higher than 2011, has fallen and is now about 3.45% lower than that in 2011  reducing from $7.98 to $7.71 a piece.
This is also a reflection of falling cotton prices and stronger dollar ,  but on the whole industry should not be very unhappy. 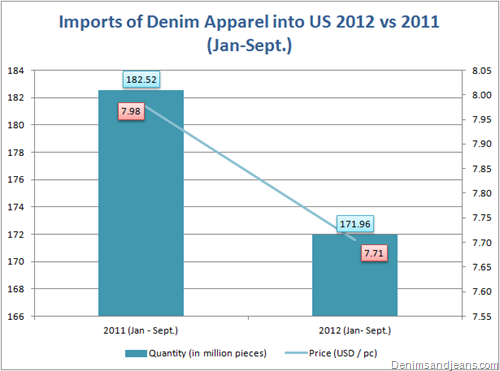