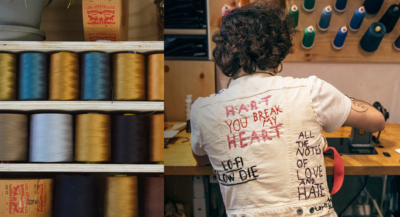 Levi Strauss & Co. (LS&Co.) announced their financial results on Feb 5th,2018 for the fourth quarter and fiscal year ended November 25, 2018. The company seems to be on growth path with positive growth of over 9% in revenues. Chip Bergh, CEO, has been following a simple mantra to grow the brand – “Grow profitable core, expand for more” . He found that the two main pillars of Levi’s global sales were – men’s bottoms and Docker’s men’s bottoms in the US . In fact, men’s products accounted for 72% of the brand’s sales in 2017. Focusing on these and the cash cow markets US, France, Germany, Mexico and UK , he used the cash generated here to develop the weaker areas like women’s clothing. As a result, the sales in women segment have been growing and the average age of buyer of Levis products has come down from 47 when he took over to approx 34 now. Besides, Direct to Consumer sales through owned retail stores and websites were given a renewed energy and as a result the sales from these jumped from 21% of total sales to about 33% now !

According to the results reported, the net revenues of Levis grew by 9 percent however the net income declined by 17% ($97 million) in the 4th quarter primarily due to a tax charge related to the impact of the Tax Cuts and Jobs Act (the “Tax Act”). While analyzing the fiscal year results, we learnt that Net Income has no change however Net revenues grew by 14%.

“We had an outstanding year with reported net revenues of $5.6 billion, growing 14 percent year-over-year on a reported basis,” said Chip Bergh, president and chief executive officer of Levi Strauss & Co. “It’s clear our strategies to diversify our product portfolio, expand our direct-to-consumer business, and deepen our connection with consumers worldwide have worked, resulting in both higher annual revenues and gross margins.”

Reported regional net revenues for the quarter were as follows:

Reported regional Operating Income for the quarter was as follows: 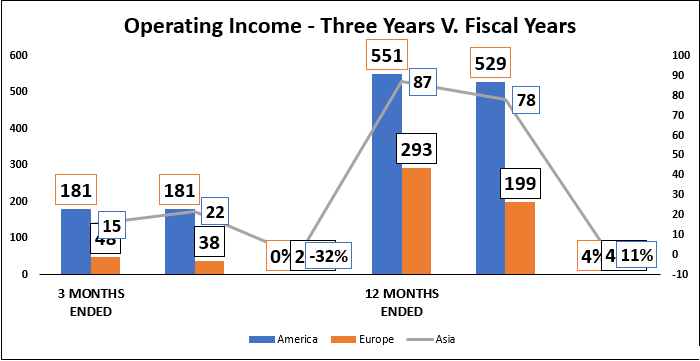 America is still the favorite location for Levis hoHowever we see from the growth point, Europe has delivered far better than America. Against the 0% change in the operating income in America, Europe has a 26% growth on a quarterly basis and 47% growth on an annual basis as against the 4% of America’s Operating Income growth.

In 2018, MORNING CONSULT conducted a survey and they came out with the following result which says:

“Levi Strauss & Co., one of the oldest companies Morning Consult tracks in its Most Loved Brands list, leads all U.S. denim brands with a net favorability ranking of 72. That’s at least 20 percent higher than the net favorability of VF Corp.’s Lee and Wrangler brands and nearly double the average of Levi’s top seven tracked competitors.” 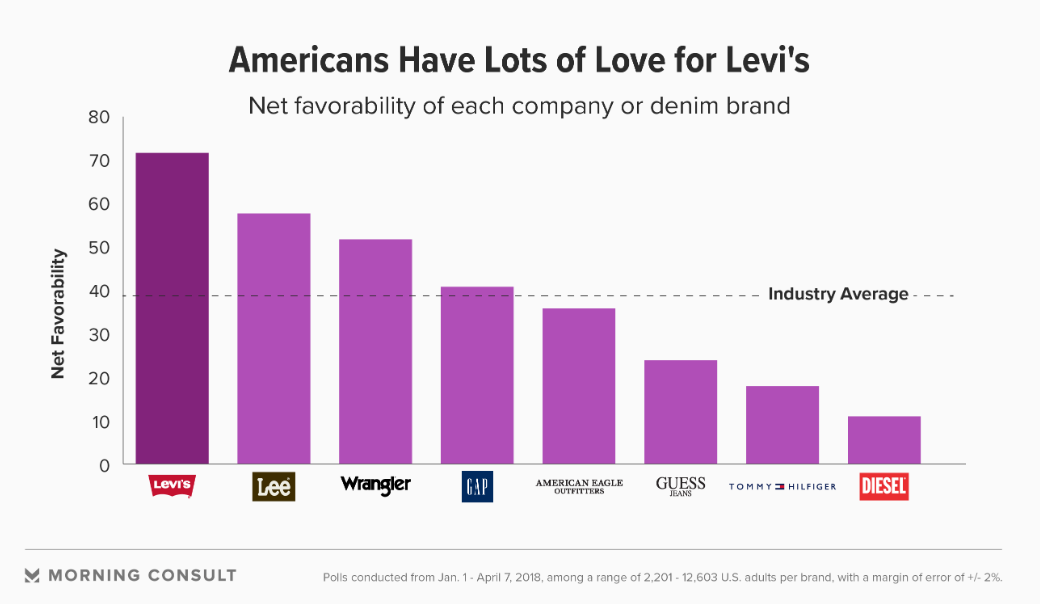 Many reports suggested that Levis is poised for a comeback and the growth of 9% connotes the same. However apart from America, the company must expedite its expansion drive into Europe and Asia also where its competing companies like Zara, H&M, Wrangler, Gap and Pepe Jeans  have been expanding rapidly.