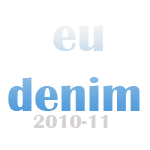 The US imports of denim have been a cause for concern this year. The fall in imports   has been consistently rising and almost touching a negative growth of 14.3% from Jan to Sept  compared to similar period in 2010.
The current market  reports coming from EU are not very encouraging .Many  retailers are believed to be holding their purchases or delaying them. In fact , one of the major retailer from EU  is believed to have postponed a major part of a 20million pcs order .. The situation does not look so good.

But when we look at the figures of imports of denim apparel from Jan to July 2011 as compared to the similar period in 2010, we find a totally different situation. The imports of jeans into EU has actually increased by  5% over the same period in 2010.

The figures are quite inspiring and confusing at the same moment. They do not reflect the current economic turmoil that Europe is going through. The price increase , though seems justified as the impact of cotton price increases of last year have continued to be felt this year at the retail level.  Many countries have increased their exports with China having increased about 3% and

However, what happens in the next few months shall be very important and indicative for the industry . The reports coming from major exporting(to EU) countries including  Bangadesh , China, Pakistan etc have not been very good. Most of the apparel exporters have indicated that they are short of orders or have requests from the buyers to postpone the orders to next year. The psychological impact of developments in Italy , and other EU countries is perhaps taking a toll with the retailers and many of them not wanting to take a risk in this situation.