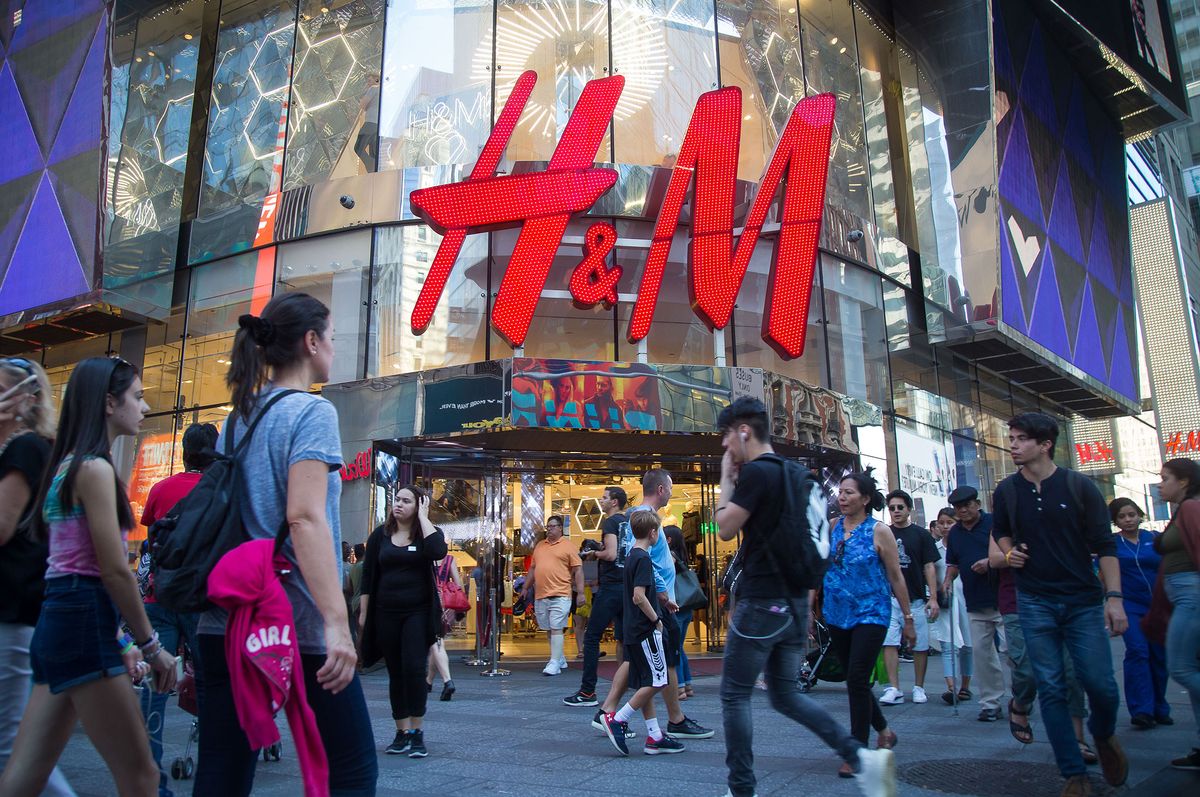 On the Jan 30 earnings call, CEO Karl-Johan Persson said that

“The supply chain is a key area as well for our transformation, where the focus is on speed, flexibility, and efficiency to create an even better customer experience. And the work spans the entire product flow and — where logistics centers and logistic systems are important parts. We have, for example, opened a new high-tech logistic center in Milton Keynes in the U.K. that will replace several existing centers and serve both stores and online.”

Below are some of the insights and expansion plans according to the latest Press release of H&M:

Below are sales analysis covering the different periods. Please note that the official data were in SEK which we convert in USD. The base date for the conversion is – Feb 7, 2019

Germany, The USA, and the UK are three top-selling countries and collectively they contributed approx. 34% in the total sales in Q4 2019, Germany with $913.8 million is at Top. H&M has the highest number of stores i.e, 593 in the USA including 13 new stores which were in Q4 2019. The average sales/store in Q4 stood at $1.26 million/store however China fell short to this and registered a sale of $0.62 million/store only. China also saw the highest closure of stores i.e, 4 in Q4 2019. Russia witnessed an encouraging spike of 24% (highest amongst all)  in the sales followed by the USA and Italy. 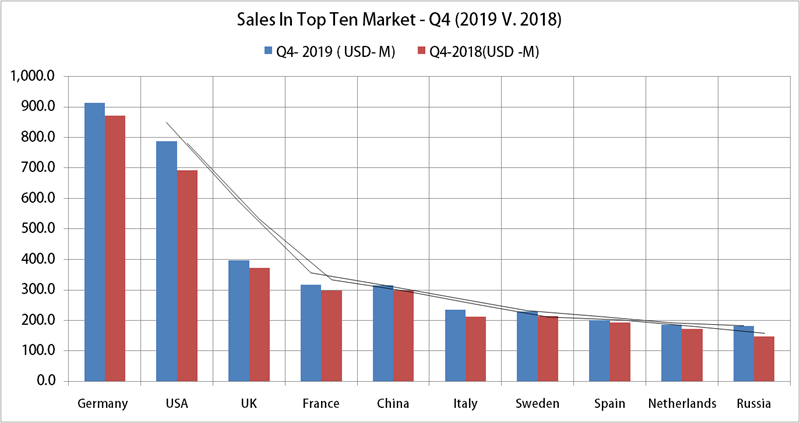 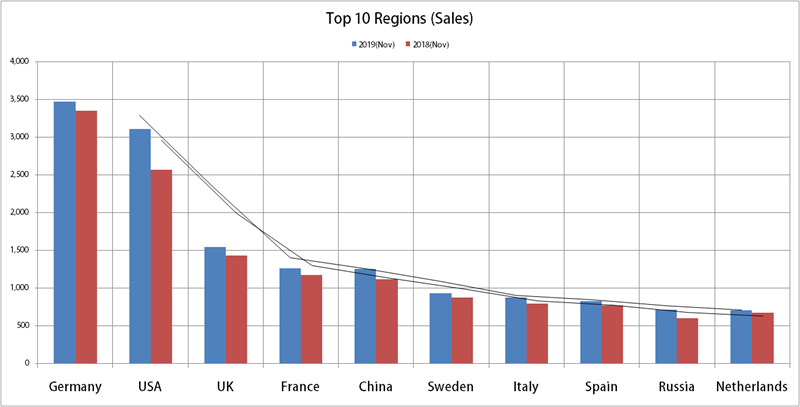 H&M has been aggressively expanding to different regions in the last couple of years. In Countries like India, the Philippines, and Mexico, H&M has invested a lot of resources and the results are unprecedented. Alone in India, within a couple of years, H&M opened 47 stores which generated $208 million sales, YOY sales growth by the end of Nov 2019 stood at 43%. Mexico with 52 stores is close to crossing the sales figure of $400 million, the growth was 29% by the end of Nov 19. New destinations including Ukraine and Vietnam have been outperforming and according to the various reports, H&M is going to expand its footprints more aggressively in the coming years. 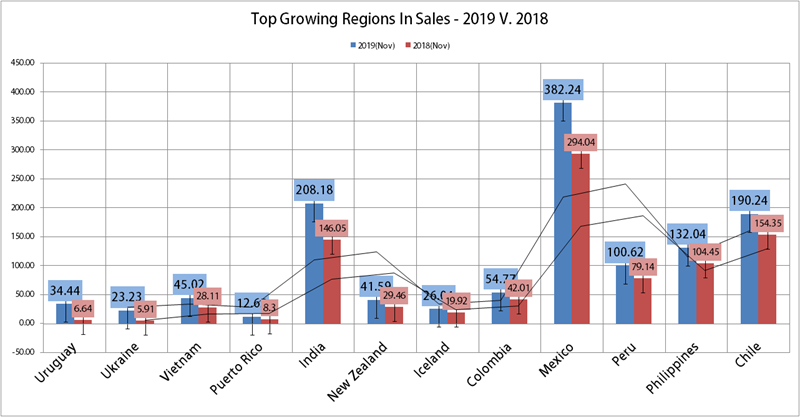 With reasonable pricing and great supply chain distribution, H&M has been giving tough competition to its rival fast fashion brand Inditex. Zara, one of the leading labels from Inditex has not been able to grow this way as H&M has been growing in emerging developing countries. But it is not to say that H&M is not facing its own share of problems including excess stocks which it needs to dispose off. Time will tell ! 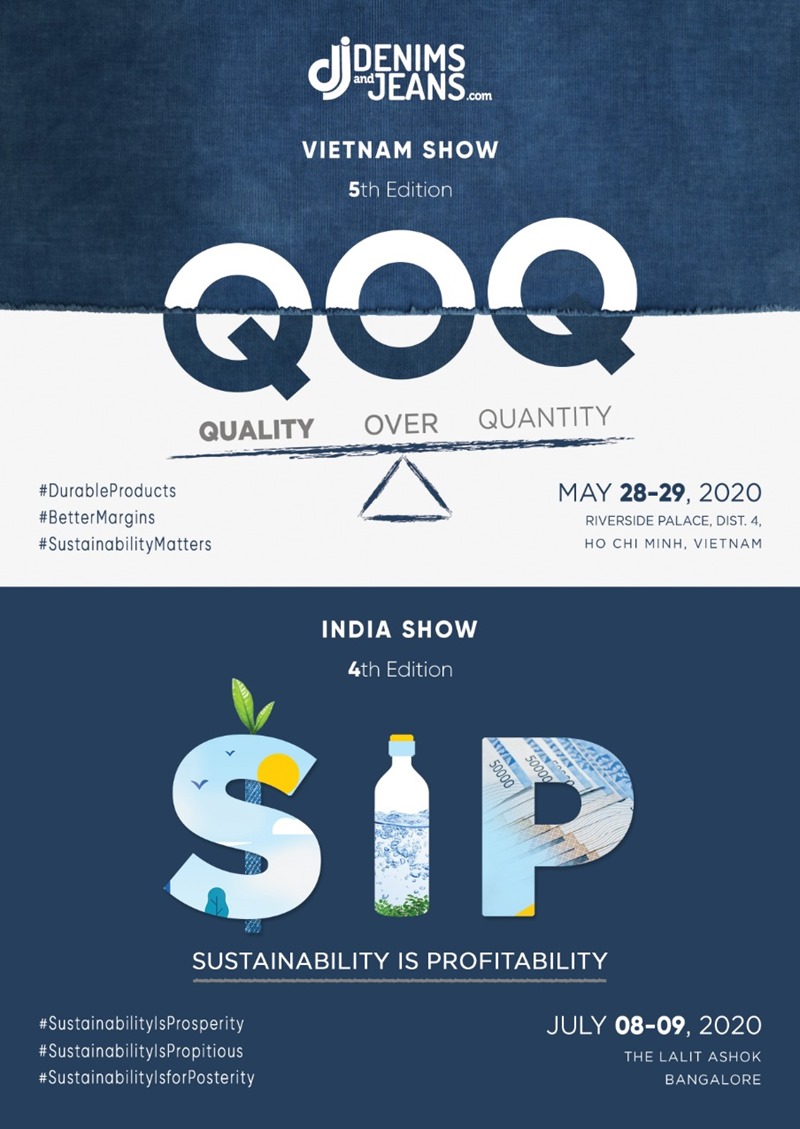